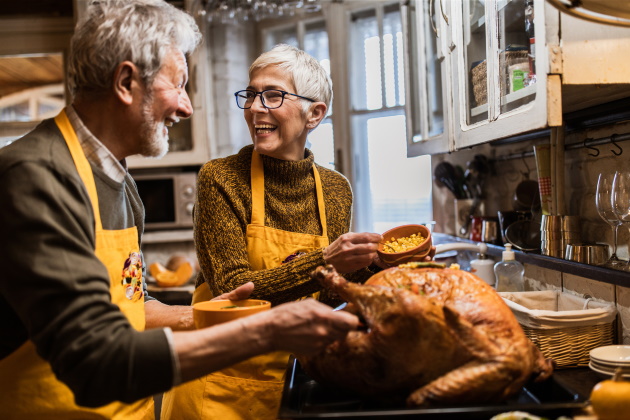 It seems like an all-American holiday, but Thanksgiving is more universally celebrated than we might think. Nearly a dozen countries observe such a day of gratitude, usually in the fall, and traditionally held in recognition of a bountiful harvest.

Although dates and specific traditions vary, here are some of the countries that have a designated holiday for giving thanks.

Our friendly neighbor to the north is one of four countries that actually call their fall celebrations Thanksgiving. Canadians, however, observe their Thanksgiving on the second Monday of October rather than the fourth Thursday of November when the holiday is celebrated in the U.S.

Declared a national holiday in 1879, it’s a big deal for citizens of the Great White North, who gather with friends and family for a Thanksgiving feast on any one of the days of the three-day holiday weekend.

Freed slaves from the United States carried the tradition of Thanksgiving with them when they founded the West African nation of Liberia in the 1820s. Liberians celebrate Thanksgiving on the first Thursday of November.

It’s said to be a day for people to give thanks for freedom and the founding of their country. Much like in the United States, families gather for music-making, dancing and a special meal — typically, roasted chicken, mashed cassavas and green bean casserole.

In Brazil, Thanksgiving Day, or Dia de ação de Gracas in Portuguese, unsurprisingly serves as an opportunity for carnival-like festivities. Celebrated on the fourth Thursday of November, it is, in a spiritual sense, a time to express gratitude to God for an abundant harvest and bountiful resources.

In reality, it has evolved into a huge carnival. Houses are colorfully decorated and music rings through the streets. In every home, spectacular feasts are prepared, traditionally including turkey, mashed and sweet potatoes, corn stuffing and pumpkin pie.

The resemblance of this menu to our own can likely be attributed to the fact that the tradition of Thanksgiving was introduced to Brazil in 1949 by the country’s then ambassador to the U.S. who was fascinated by the concept and wished it to be celebrated in his home country.

Thanksgiving came into being in the Caribbean island nation of Grenada under the most unusual of circumstances. It takes place on Oct. 25 and commemorates the United States military’s coming to the country to help restore order after its communist leader, Maurice Bishop, was killed in a coup in 1983.

Soldiers stationed on the island lamented to locals that they would be missing their upcoming Thanksgiving dinners — and to their surprise were served an American-style feast, complete with turkey and all the traditional sides. It was an endearing gesture, now observed as an official holiday in Grenada.

Thanksgiving in Germany has a long tradition but one much different from that of the United States. Erntedankfest (“harvest festival of thanks”) is primarily a rural and a religious celebration. It is celebrated on the first Sunday of October, but that can vary by locale.

A typical Thanksgiving celebration in Germany begins with church services followed by a procession that leads to music, dance and food. An evening church service gives way to a lantern or torch parade and fireworks. Owing perhaps to the influence of the large numbers of American troops stationed in the country, turkey has in recent decades earned a prominent spot on the holiday table along with the more traditional pork roast.

This multiethnic Southeastern Asian nation of 32 million people calls its Thanksgiving Kaamatan, and it occurs in May when Malaysians come together to give thanks at the end of the annual rice harvest. The holiday is celebrated with dancing, traditional games and buffalo races. A variety of rice-based dishes is served along with tapai — a wine made from (what else?) but rice.

Thanksgiving, in its various iterations, also is celebrated in Ghana, Japan, China, Mexico and Israel.