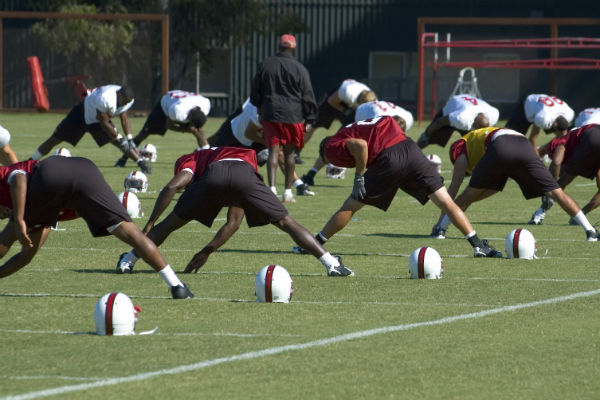 Injuries have always been an unfortunate aspect of sports, and the prevalence of those injuries has gone up in recent years. From ACL tears to high-ankle sprains, microfracture procedures to Tommy John surgeries, avoiding injury is always a major concern for coaches.

They implement training programs and practices to condition their athletes for the rigors of the sport. Coaches teach the fundamentals of the game to help prevent injury whenever possible.

Four years ago, Athletic Director and Head Football Coach Todd Rodgers had some ideas about revolutionizing the traditional training methods of football. He added a strength and conditioning coach to his staff in the form of Matt Jordan. Together, and with the aid of other coaching staffers, they started an approach based more on explosive movement and training.

"If you're just doing traditional squat or traditional bench, you're just working a certain number of muscles," Jordan said. "But if you add some angle to the bench, or a hand placement, now it’s working different muscles. So we try to emphasize a lot of movement and range of motion."

Each athlete gets his or her own unique program card. While many of the lifts and exercises may be the same, the card is tailored to that individual based on consistent testing.

Each sport also gets its own unique program during the season, based on the exercises that will maximize range of motion and emphasis on the muscles used in that sport. For example, volleyball players stress shoulder motions, while cross country runners may focus on the core.

And it's not just the exercises, but how they approach the workouts, which are fast-paced and varied.

"We want to be a little more nontraditional and think outside the box," Jordan said. "I think by doing that, you keep the kids motivated more."

Using football as an example, Rodgers points out the results are speaking for themselves.

"We had less than five games lost by starters last year during a 16-game, two-scrimmage season," he said. "We think we're putting a physically fit athlete out there to perform. I do understand a little bit of that is luck, but we feel like our kids are healthy and have good range of motion.

"We feel like they've got total body strength. We might lose a bench press contest to the other team that we're playing, but we feel like football is a game of movement. And we can get out there and move as big, physical and strong kids and meet the demands of the game."

Rodgers also noted that in the past two seasons, Argyle has sent five players to Division I football programs, and four of those have played as true freshmen.

"It tells you that they're ready," he said. "They're leaving our program ready to play the college game. They're physically fit and ready to embrace the weight training and rigors of college football and step in."

But it isn't just the football team. Coaches of other sports — especially girls sports — rave about the strength and conditioning program. Jordan and Rodgers contend that weight training isn't traditionally a focus of experience on the girls side, and thus coaches of girls programs embrace having a strength and conditioning expert who can take that aspect off their plate, leaving them to focus on skills, tactics and strategy.

There's also an even bigger picture angle to the program. Argyle has high athletic participation, at over 90 percent in middle school, when the training program begins. And though that may drop some into high school, the kids are getting physical education at a young age and can carry it with them beyond school.

"We're able to reach a very large population with our strength and conditioning program, and we feel like if nothing else we're training kids to be healthy for a lifetime," Rodgers said.