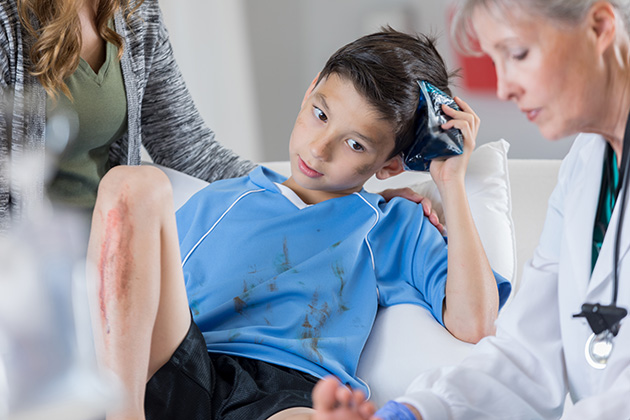 Young athletes for generations have emulated the pros. The similarities appear to be extending to devastating sports injuries.

More than 2.6 million children each year are treated in emergency rooms for sports-related injuries, reports the Centers for Disease Control and Prevention (CDC). With high school athletic participation reaching a record level, according to a recent survey released by the National Federation of State High School Associations, more participants are being exposed to sports — and their potential injuries — each year.

Overuse is a hot topic among youth sports, in part because it's preventable. Specialization has drawn debate, with camps firmly established on each side.

With college coaches now recruiting in grade schools, it's difficult to argue with the value of focusing on a single sport — especially if a college scholarship is the goal. On the other hand, exposure to a wide range of sports provides benefits as well, not the least of which is the chance for young muscles to recuperate after a sport season.

Specialization, which was the focus of an earlier MultiBriefs article that addressed concerns of health officials, coaches and athletes, has its drawbacks, according to Dr. Sebastian Gonzales.

While concussions and their long-term effects are a sizable concern among athletes across a range of sports, other injuries are striking young athletes.

Particularly widespread are growth plate injuries. The growth plates are attached to long bones in children, and bones replace the plates as children finish growing. Fractures occur with collisions, as happen frequently in sports, but can also be attributed to repetitive activity — like that in training for gymnastics and baseball pitching.

Most children who suffer growth plate injuries do not experience lasting problems, according to the National Institute of Arthritis and Musculoskeletal and Skin Diseases, but abnormalities can occur on occasion. Those can include one leg shorter than the other, or a crooked limb. Knee and ankle injuries are most prevalent among young athletes, the National Institute of Health reports.

Parents and coaches can play a large part in prevention. Governing bodies have their role as well. For example, most states have limits on the number of pitches that baseball pitchers can throw over certain time frames. Restrictions vary from state to state.

At least one study has addressed whether early specialization actually provides athletic benefits. The research headed by Dr. Neeru Jayanthi states that "there is no evidence that intense training and specialization before puberty are necessary to achieve elite status." The researchers further point out that early specialization can lead to "higher rates of injury, increased psychological stress and quitting sports at a young age."

As with most activities involving children, diversity and limits are crucial, not only for physical health but also mental health.

"Scheduling an offseason is the easiest form of prevention," Gonzales told MultiBriefs. "Sometimes the kids need to be treated as our multimillion-dollar athletes. ... Don't they get an offseason? Doesn't a Major League starter get 4-5 days off between starts? We should respect our kids' development."

Stemming the tide of youth sports injuries will take a team effort, but that is something athletes should find familiar.