Teachers are a lot less enthusiastic about innovation than you think 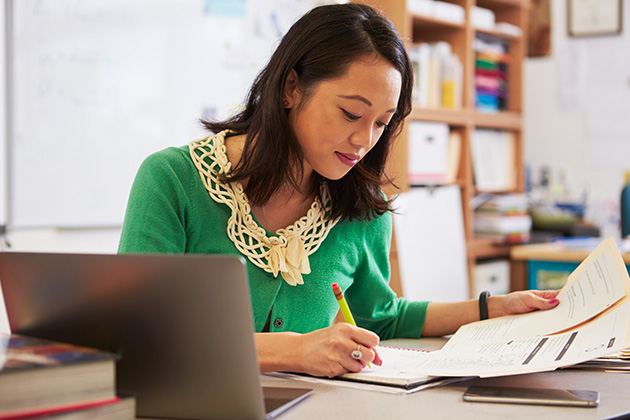 A courageous teacher fights an unwieldy bureaucracy to introduce powerful new learning strategies. Recognize this? It’s basically the plot of “Dangerous Minds,” the movie starring Michelle Pfeiffer, a plot it shares with a lot of other heartwarming film and television dramas.

But also — if you accept the results of an Education Week 2018 poll on teachers and innovation — it’s a storyline you’re not that likely to find in real life. Teachers, it turns out, are less enthusiastic about innovation in education than you might think. It’s actually their administrators who favor it.

One survey result that stands out particularly is that a majority of K-12 teachers are lukewarm about innovation in their schools. Only 17% consider innovation a high priority. About half that many, 9%, report that real innovation took place in their own schools in the most recent school year.

Administrators are far more positive — a little under three-quarters of principals and administrators gave innovation a very high priority and most (89%) felt that their own schools invited and/or experienced innovation in the past year.

Can teachers and innovators be talking about the same school system? Apparently, but with a strong disconnect between the attitudes of teachers themselves, who saw very little innovation and didn’t give it a high priority, and their administrators who saw a lot of innovation and were strongly motivated to deliver more. But why the big difference?

The Difference Between Practice and Theory

Another survey result that stands out may explain why: the farther school employees were removed from the classroom, the more innovation they saw and the more they liked it. While only 43% of teachers gave innovation a high priority, two-thirds of principals did. And district administrators, who would normally never find themselves in an active classroom with actual students, liked it best of all by a margin of three to one.

Another difference in attitudes toward innovation the survey revealed is that more than half of all teachers surveyed reported they felt pressured to drive innovation — a pressure that the poll suggested originated with their administrators (parents were not included in the survey). Interestingly, the poll also reported that administrators themselves felt this pressure much more than teachers.

Poll results indicate that the pressure to innovate among administrators likely originated with their awareness of a changing economy that puts increasing emphasis on educational achievement as a requisite for employment. Teachers, the poll reported, are far less concerned about the employment consequences for their students.

What Holds Back Innovation?

Anyone who has spent time as a classroom teacher can tell you that the biggest obstacle to innovation is the workload, which the poll confirms. Teacher dissatisfaction over both the amount time and the lack of staff support has always been an issue, and it’s currently higher than ever.

The poll confirms that the most important reason teachers don’t innovate is the existing workload. More than a third cited day-to-day deadlines and time pressure as the primary reason they didn’t pursue innovation. Following that (22%) was a lack of funding.

No other factor was cited by more than 10% of the teachers polled. Most other factors were cited by very few. It’s really a two-issue problem: if innovation in education doesn’t occur, it’s because there’s not enough time or money to allow it.

Turning from the Education Week poll to a federal government statement on innovation could give you whiplash—the two realities are that far apart. According to a 2014 policy statement from the Congressional Budget Office, “Innovation is a central driver of economic growth in the United States,” and “Policymakers endeavor to promote innovation,” because of the favorable effect of innovation on productivity.

The reality, however, is that federal support for innovation in education is not that high in Congress. And innovation costs money — to begin with, since innovation takes time away from other activities, teacher loads would need to be reduced (i.e., more teachers would necessarily be hired).

This costs money that would have to come from other federal programs or from further tax increases. Practically speaking, money that might at one time have been available through an increased budget deficit is almost certainly off the table after the much criticized 2017 reduction in taxes (with concomitant deficit increases).

While it’s no doubt true, as the CBO asserts, that “innovation is a central driver of economic growth,” it’s unlikely there will be any striking innovations in education in the near future. The will of the people, at least inasmuch as it’s accurately represented by Congress, is that we’re not interested enough to pay for it.