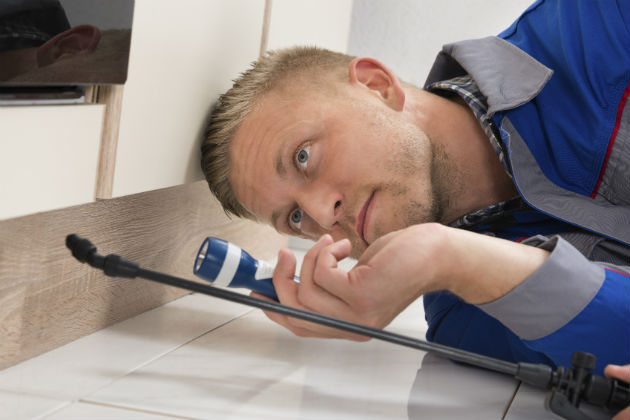 Whether it's from pest management professionals advising center directors and landlords, the Internet or the California Department of Pesticide Regulation (DPR), the message about being mindful when considering pest control methods in California child care centers is clearly being heard, a 2013 survey by DPR has revealed.

The program combines encouragement of these practices with outreach and education to schools and child care centers about California's Healthy Schools Act (HSA), a law that sets certain requirements for pesticide use in these establishments, supporting a healthy environment for all.

To better understand how pest management and pesticide use has changed since an initial baseline survey was taken in 2008, DPR surveyed 481 California child care centers in 2013 about their pest problems and how they are managed. Both 2008 and 2013 surveys asked centers about five topics:

Trends are showing an increase in IPM practices and lower-exposure-risk pesticide use, but complying with the HSA has declined in recent years. Hopefully, the trend will turn around when the new annual training requirement for all center staff who use pesticides, including disinfectants and sanitizers, begins in July.

With 85 percent of child care centers reporting a pest issue of some type, the top four problem pests reported have not changed since 2008: ants, spiders, stinging insects (bees and wasps) and rodents (mice and rats). These pests thrive in child care settings because children often drop crumbs without a second glance, and even the smallest leaks in indoor or outdoor plumbing can provide enough water to sustain an invading population of critters that like to hide in the dark, undisturbed shadows of classrooms and school grounds.

Anyone who has ever had ants will not be surprised to read that they are the number one pest reported. With 56 percent of centers reporting ant management issues, they often rely on multiple tactics to get them under control.

Many centers use IPM practices like sanitation, exclusionary strategies and bait stations as a first response. However, 44 percent of centers are still depending on sprays and foggers — pesticides that have a higher potential for exposure — to control the problem rather than lower-exposure-potential pesticides, such as ant bait stations, which only 19 percent of centers reported using.

The same is true for spiders, the second-most common pest reported. Although most spiders in California are beneficial and not invasive like ants, the innate aversion to spiders and their perceived threat may be the reason why centers choose foggers and sprays, which are short-term fixes, over removal techniques when an issue arises.

Other common pests cited by centers as a problem were bees and wasps, which are most often controlled with pesticide sprays; and mice and rats, which are usually well controlled with IPM methods such as removal of food and water sources, traps, exclusion by blocking entry points, and enclosed bait stations.

The use of pesticide sprays differs regionally. In regions like the Central Coast, where a large concentration of environmental advocacy groups are located, pesticide spray use is quite low, despite half of the centers from that area reporting they have ant troubles.

The Central Valley and South Eastern region, where most urban centers are surrounded by agricultural fields, the use of pesticide sprays to control ants is more prevalent. This may be due to the presence of the Red Imported Fire Ant in those areas, which create a bite risk to children and consequently a pest control emergency.

It appears that the predominant decision makers cited in the survey — center directors — are making healthier decisions when it comes to pesticide use, sometimes in conjunction with pest management professionals and landlords. While reported pesticide use increased from 55 percent to 77 percent between 2008 and 2013, the use of lower-exposure-potential pesticides such as bait stations increased more than threefold from a mere 8 percent to a remarkable 26 percent.

The use of pesticides sprays and foggers decreased from 47 to 39 percent. The prevailing reason centers cited for using these products was that they are effective. Interestingly, the second reason cited was "safety," which may refer to the perception that the presence of pests is unsafe. Other reasons included that they were "required," "cleaner" and "convenient," but fewer people responded this way than in 2008.

Of the centers that used pesticide sprays and foggers, fewer reported that they always sent out annual notification of pesticide use to parents in 2013 than 2008. More respondents in 2013 replied that they did not know if a notice was sent out or that it was not applicable, indicative of the absence of a trained IPM coordinator in many centers.

About a quarter of respondents stated they always sent the annual notification to parents, whereas about 18 percent said they never sent parental notification. The remaining respondents replied that they "sometimes" sent notices out, did not use pesticides or felt that the notification requirement did not apply to them.

Less than 20 percent of centers had a registry of parents who elected to be notified of individual pesticide applications, while a few centers indicated they offered a list, but no parents signed up. It is required that all centers make this option available.

It is important to remember that the intent of the HSA is to keep parents informed and children and child care staff safe. The adoption of an IPM program is voluntary, but the creation of an IPM plan that details the center's pest management strategy for the year is not. It is the cornerstone to all the other requirements the HSA lays out.

Every center must have an IPM coordinator designated to follow through on the duties laid out by the law: create an IPM plan, notify parents of anticipated pesticide use annually, establish and maintain a list of parents or guardians if they wish to know of individual applications, post warning signs in areas where pesticide use will occur and has occurred, keep records of pesticide use at the center for three years, and report pesticides used in and around the child care center to DPR at least annually. The only exception to these requirements is for family child care homes.

The training is for all center staff who use pesticides — including antimicrobials such as disinfecting wipes and sanitizers — to help them understand how pest management decisions and cleaning practices can have an effect on children's health and to encourage the adoption of best practices so centers can create healthy learning environments.

For more information about IPM in child care settings and the Healthy Schools Act, visit the DPR School and Child Care IPM page. Online training courses created by DPR will be made available in early 2016. A copy of the full report can be found here.

Michelle Andreetta is an environmental scientist with the School and Child Care IPM Program at the California Department of Pesticide Regulation. Dedicated to creating healthy learning environments in schools and child care centers, she conducts trainings and workshops statewide on the subjects of the Healthy Schools Act, Integrated Pest Management and the safe use of pesticides around children. Michelle graduated with a B.A. in environmental studies from University of the Pacific in 2013.