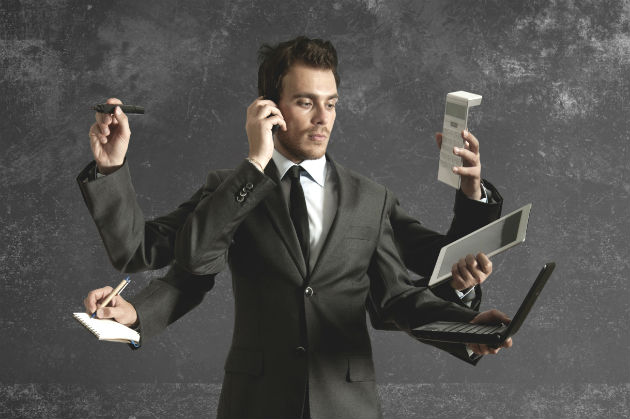 You're laser-focused on preparing for tomorrow's presentation — but the phone won't stop ringing. And the emails keep pouring in.

Your staff members are popping in, one after another, to report fires you have to put out right this second. Yep, you're distracted.

Juggling essential tasks doesn't have to result in chaos, though. Use these easy, science-driven multitasking tips to accomplish everything on your plate, without sacrificing accuracy or quality:

UCLA researchers report that clearly stating to yourself which task you most value will help cement your primary focus on that task, even if your attention gets divided by other to-dos.

Try not to take on more than one additional duty at a time to make sure you'll accurately tend to and remember the details of this primary task, however.

Don't try to solve two complex problems at once.

A study from the University of Michigan found that doctors were able to accurately and swiftly diagnose a patient while completing simple concurrent tasks, like answering basic questions from co-workers.

If those doctors were asked to remember something more detailed, however, that tended to delay their ability to diagnose accurately. The takeaway: don't overtax your attention span by taking on more than one analysis-driven endeavor at the same time.

Avoid multitasking early in the morning.

Research from the University of Tuebingen found that attempting to do too much at once soon after you awaken won't be effective.

This is due to the fact that sleepiness and the pattern of your circadian rhythm slows your brain's ability to make the right choices, and also slows your reaction time. Start off your day by checking a simple, singular job off your list, then move into work that requires multiple facets as you feel more alert.

It can be tempting to take a quick peek at your Facebook page in the middle of writing a long report, but Michigan State University research shows that internet breaks are actually so engaging to our brains, they can pull our full attention from any important mental job we must complete. Save personal emails and surfing the web for a reward after you finish up.

Use more than one of your senses at the same time.

You should select the photo and listen to the commercial at the same time, saving the copy reading for last.

Why? A study from Ohio State University found that combining work on two visual tasks at once means your gaze will move around too much, causing your attention to be less fixed.

It's better working on a visual task with an audio task, which engages different parts of your brain's attention capacity, and won't hurt your concentration as much.