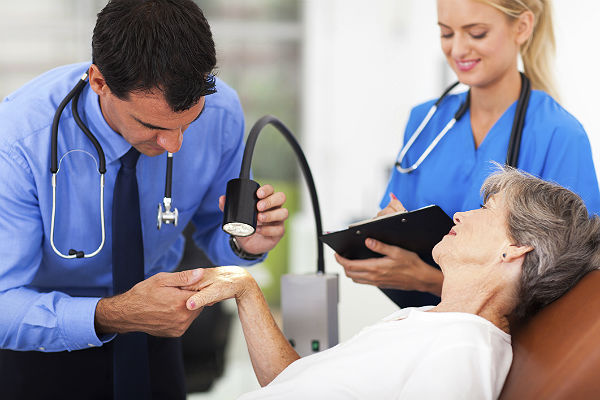 More than 75 percent of all dermatology complaints seen in emergency departments are acute rather than chronic, according to research results presented at the 23rd European Academy of Dermatology and Venereology Congress.

Priyanka Vedak from Massachusetts General Hospital in Boston and her colleagues conducted the study in hopes of evaluating the dermatologic diagnoses in the emergency department there, and to assess the use of dermatology consultations.

The researchers presented the results of their study at the conference, held Oct. 8-12, in Amsterdam. Medical News Today detailed the presentation.

Presenting dermatology complaints in the ED

Unless the patient's skin is sloughing off in an apparent case of Stevens-Johnson syndrome, some medical professionals regard "dermotologic emergency" as an oxymoron. Patients also tend to disregard dermatological conditions unless the skin problem becomes severe or if they have limited access to dermatology care for a chronic problem.

In fact, a 2011 study in JAMA Dermatology shows that dermatologic complaints account for only 7 percent of outpatient visits, even though the estimated prevalence of skin conditions is 19 to 27 percent.

The 2011 study found that infections of the skin and subcutaneous tissue accounted for more than half of all dermatology complaints presented to the ED. Dermatitis, urticaria and disorders of skin appendages were also common complaints. Triage assessed 75 percent of these cases as nonurgent or semiurgent, with only 2 percent assessed as an emergency. In that study, ED doctors discharged 94 percent and admitted 4 percent.

This lackluster concern for potentially serious dermatological conditions could be due to the low acute mortality associated with most skin problems. Certain skin conditions, however, should be treated as emergencies but not all ED physicians have the training and expertise to spot the subtle differences between a benign rash and a serious one.

Conditions such as bullous arthropod reactions, acute generalized exanthematous pustulosis (AGEP), drug rash with eosinophilia and systemic symptoms (DRESS), pityriasis lichenoides et varioliformis acuta (PLEVA) and acute allergic contact dermatitis can catch a physician off guard. A consultation with dermatologist, either in the ED or in a follow up appointment, can make the difference between life and death in some cases.

Vedak and her colleagues reviewed 733 ED visits at their institution and determined that 83.5 percent were for acute dermatological complaints lasting for four weeks or less, and that 12.5 percent were for chronic skin problems that lasted longer. Healthcare providers neglected to note the acuity in 4 percent of cases.

In most cases included in this study, the skin problem was the primary complaint. ED physicians were unable to come up with a clear diagnosis in most of the study cases, documenting 13.6 percent of cases as rash not otherwise specified (NOS) and 12.9 percent as urticarial in nature.

Overall, 14 percent of patients who showed up to the ED complaining of dermatological problems received input from a dermatologist, either through consultation or with an outpatient follow-up visit. Patients in the study who received an NOS diagnosis seemed reluctant to follow up as directed, with only about one-third undergoing additional evaluation or dermatological follow-up.

Vedak discussed possible limitations to the study, citing the study's retrospective design as a potential drawback. Additionally, the researchers only reviewed six months worth of records, so the study does not reflect seasonal variations that affect dermatological complaints presenting to the ED.

Furthermore, the researchers could not assess the outcomes of subsequent follow-ups conducted at facilities outside Massachusetts General Hospital.