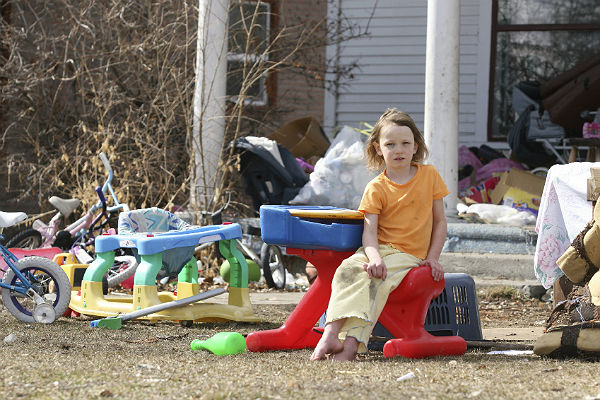 Between 2009 and 2010, 1 million more children in America joined the ranks of those living in poverty, bringing the total to an estimated 15.7 million poor children in 2010, an increase of 2.6 million since the recession began at the end of 2007. Most of these children have parents who work, but low wages and unstable employment leave their families struggling to make ends meet.

Poverty can impede children's ability to learn and contribute to social, emotional and behavioral problems. Poverty also can contribute to poor health and mental health. Risks are greatest for children who experience poverty when they are young and/or experience deep and persistent poverty.

In fact, poverty appears to affect the brain development of children, hampering the growth of gray matter and impairing their academic performance. Researchers have discovered that poor children have 10 percent less gray matter in several areas of the brain associated with academic skills.

The results of a new study in JAMA Pediatrics could have profound implications for the United States, where low-income students now represent the majority of kids in public schools — in 2013, 51 percent came from low-income families. Previous studies have shown that children living in poverty tend to perform poorly in school with markedly lower test scores, and these kids do not go as far in school as their well-off peers.

To see whether this poor performance in school is related to some physical effect that poverty might have on a child's brain, researchers analyzed MRI scans of 389 typically developing kids aged 4 to 22 years, assessing the amount of gray matter in the whole brain as well as the frontal lobe, temporal lobe and hippocampus. As we know, gray matter contains most of the brain's neuronal cells whereas other parts of the brain, such as the white matter, carry information from one section of the brain to another.

According to the research, these same kids scored an average of four to seven points lower on standardized tests. The researchers estimated that as much as 20 percent of the gap in test scores could be explained by reduced brain development.

There are other poverty-related issues that may contribute to developmental lags in children's brains. For example, low-income kids are less likely to get the type of stimulation from their parents and environment that helps brain growth, which may be explained by the fact that they hear fewer new words and have fewer opportunities to read or play games. Their brain development also can be affected by factors related to impoverishment, such as high stress levels, poor sleep, crowding and poor nutrition.

According to Dr. Joan Luby, a professor of child psychiatry at Washington University School of Medicine in St. Louis, this study serves as a call to action, given what's already known about the effects of poverty on child development: Poverty negatively affects brain development, and early interventions are powerfully effective, more so than interventions later in life.

All children should have a regular home and a bed, good nutrition, stimulating educational programs and social activities. They also need parents who are less stressed and can spend more time with them.