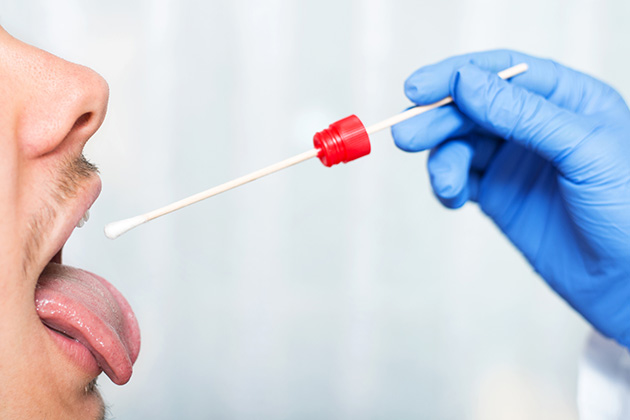 Researchers from the University of Southampton in England recently used a point-of-care swab test to quickly diagnose flu and other viral infections in patients with severe respiratory conditions. They found that using the swab in this way can result in shorter courses of antibiotics and a shorter stay in the hospital.

Point-of-care testing (POCT) could reduce unnecessary antibiotic use and therefore help address antibiotic resistance. Many clinicians — particularly those in emergency departments and urgent care clinics — prescribe antibiotics to patients presenting with acute asthma attacks or symptoms of chronic obstructive pulmonary disease (COPD) even when the cause of the infection is not readily apparent.

The new study, published online this month in The Lancet Respiratory Medicine, suggests point-of-care testing can reduce antibiotic resistance by reducing unnecessary prescribing or ineffective use of antibiotics.

The POCT procedure in the University of Southampton involved the use of a portable device that runs a rapid molecular test on swabs and delivers results within an hour. Traditional testing requires a trip to the hospital lab — and sometimes even an outside lab — with a turnaround time of several days.

Associate professor in infectious diseases at the University of Southampton, Dr. Tristan Clark, developed the procedure with help from his colleagues at the NIHR Southampton Biomedical Research Centre.

"My vision is that anyone who comes into hospital with an acute respiratory condition will receive this point-of-care test as soon as they come through the hospital door," Clark said in a press release issued by the University. "It tells us immediately what virus the person has so, for example, if they have flu they can be isolated in a side room and given antiviral drugs without delay."

The researchers tested the new procedure during two winter seasons in 2015 and 2016. They enrolled 720 adults presenting acute respiratory illness, including exacerbations of asthma, COPD, pneumonia or fever higher than 37.5 degrees C (99.5 F).

Healthcare professionals performed the new point-of-care test on half the participants and reported the results to the treating clinicians. The other half of the study participants received standard care.

In this study, the patients who underwent the point-of-care test received the correct treatment for their lung condition faster than those who underwent standard testing care. Furthermore, patients who tested positive for flu with the point-of-care testing were appropriately isolated from other patients; they also received antiviral medication sooner and more frequently than those receiving standard care.

Routine use of POCT for respiratory viruses did not reduce the proportion of patients that received antibiotics, but it did improve other outcomes.

Point-of-care tests like those tested by the University of Southampton researchers allow clinicians to provide tailored and personalized medicine while fighting against antibiotic resistance. Clinicians in hospital emergency departments and acute medical units may someday perform this point-of-care test to help create a personalized plan for patients presenting with acute respiratory symptoms.