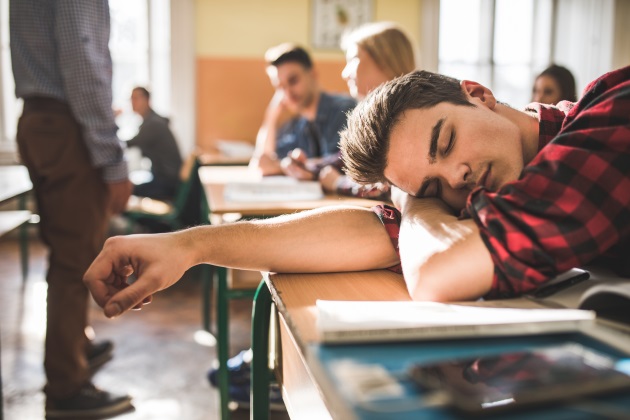 I recently spent time eavesdropping on some of my students while on a bus ride for a field trip. I couldn’t help but listen to their discussion on later start times at school. The day prior, our school had a two-hour delay due to weather, the fifth this school year.

The students were remarking at how much more productive and effective they felt overall when we had weather delays, and they wished school would start later on a regular basis. The conversation got me thinking about an issue that has come up for me time and time again as a high school principal.

On two different occasions over the last five years, I have written about this topic. In a MultiBriefs article in 2014, I wrote about pros and cons of later start times for high schools.

Then, I referenced a research report, entitled "School Start Times For Adolescents," by the American Academy of Pediatrics that concluded teens are not getting enough sleep and it is impacting their ability to perform in school. According to the report, teens need at least 8.5 hours of sleep each night. The report called upon schools to move their start time to a more reasonable 8:30 a.m. to accommodate this increased sleep need.

In a another MultiBriefs article in 2017, I revisited this topic, citing research from a Washington Post article that reported on some compelling evidence, which suggested that, above and beyond the obvious health benefits to teenagers, later school start times could actually save the country big money — to the tune of $9 billion annually.

The article referenced this comprehensive study by the Rand Corporation that concluded that schools should start school no earlier than 8:30 a.m. for two reasons: First, later start times would improve academic performance enough to increase an individual's lifetime earnings. Second, later start times would decrease the number of automobile accidents from sleepy teens.

I am now back for a third time to share even more research suggesting that later start times are good for teens. In a new article published last month in the online journal Science News for Students, researchers concluded that students in schools with later start times slept more, got better grades, and missed fewer days of school than their peers who attended schools that started earlier.

Researchers studied 90 students at two Seattle schools that changed to a later start time for the 2016-17 school year. Participants agreed to wear wristband tracking devices to monitor their activity and sleep patterns during the study, which recorded data both before and after the time change.

The results? The new schedule resulted in an average additional 34 minutes of sleep each weeknight for students. Median grades increased from 77.5 to 82.0 over that same time frame.

What’s more, of the two schools studied, one had a high percentage of students who came from low-income families, at 88 percent. In that school, Average absence rates went from 15.5 to 13.6 percent, with the average number of days tardy to school dropping from 6.2 to 4.3.

Despite the overwhelming research I have unearthed over the past several years, I continue to struggle to overcome some of my own hurdles within my school system that are preventing me from making the start time later at my high school.

My rural New Hampshire school district has limited funds for transportation. To save money, a fleet of buses makes two runs through our district. The earlier run is for secondary students, and the later run is for elementary students.

In order to delay my start time at my high school, I would need to convince elementary school families (and teachers) that an earlier start time would benefit them, or at the very least, that it would not hurt them (and would benefit older students).

In a recent Psychology Today article, Dr. Joseph Buckhalt wrote about the impact of an earlier start time on elementary school students. He acknowledges that although significant research has been done to show the benefits of later start times on older students, "there has been very little study of whether younger children, like adolescents, are affected by earlier start times. The possibilities are that (a) they are not affected at all; (b) that they are benefitted by earlier starts; and (c) they are adversely affected in some way."

While the research is sparse, the research community is putting out more requests for proposals for studies on this topic. Perhaps the data will yield some favorable results to help me with my dilemma. If not, I may need to find a way to pay for more buses.