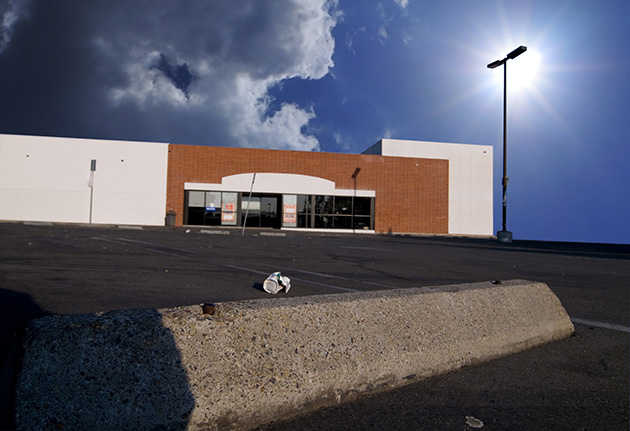 With the acceleration of retail closures in recent years, shopping malls and commercial landlords are finding themselves pressed to find new, profitable tenants. I've previously noted that commercial property management teams have begun looking for other ways to fill the void left by shuttered retailers.

While some shopping malls are using restaurants and movie theatres to rejuvenate their offerings, recent headlines show that food markets may be the latest way for a retail site to attract shoppers.

The shutdown of Target Canada in early 2015 left several retailers and outlets across the country with gargantuan amounts of unleased space. While some locations have filled the space with discount retailers such as Giant Tiger or other home improvement stores, or split the space to fit smaller retailers, several are still sitting empty.

For Upper Canada Mall in Newmarket, Ontario, a suburb just north of Toronto, the space formerly filled by Target has been vacant for almost two years. However, it was recently announced that the space will be filled by a 40,000-square-foot food market — a $60 million redevelopment.

The mall's general manager, Bri-Ann Stuart, notes that the variety of food and drink offerings will allow shoppers to stay in the mall a little bit longer. She recognizes the fact that a food market allows the mall to stay competitive, as it seeks to "provide customers with an experience."

While farmers' markets can be found in any city or town, Upper Canada Mall's food market presents itself as a northern St. Lawrence Market. With its origins rooted in the 1800s, the St. Lawrence Market is composed of three buildings and more than 120 vendors who sell fresh fruits, vegetables, meats, baked goods and more. It is a well-known tourist destination, and provides locals with a diverse variety of food options.

In the States, San Francisco's Ferry Building Marketplace touts itself as a gathering place for local farmers, artisan producers and independent food owners/operators. Not only is it a popular tourist attraction near Pier 39 and Fisherman's Wharf, but it also showcases a variety of flavours that the Bay Area has to offer. The mix of shopping and dining here has proven to be popular, and has inspired retail landlords to reconsider the properties with which they must fill vacancies.

Another alternative that is gaining traction is the notion of the grocery store in the shopping mall, in what The Washington Post calls a "survival tactic." With traditional shopping mall anchors shuttering, landlords are finding grocery stores the perfect alternative, for the size they fill, the ample parking used, and the visibility of being located in a mall. The concept of a grocery store as an anchor tenant is nothing new, but has grown in recent years.

Grocers such as Kroger, Wegmans and 365 by Whole Foods, among others, have negotiated to fill retail space across the country. The hope is that with the regular foot traffic grocery shopping produces, customers are more likely to take a trip around the mall. E-commerce may be killing brick-and-mortar stores, but a weekly shopping trip keeps shoppers coming back on a regular basis — perhaps more often a pace than those shopping at a given store.

Given what we know, can food markets and supermarkets succeed in a shopping mall setting? The excitement and benefits have been highly touted, but are there any downsides?

Food Dive suggests that sometimes, clothes shopping and food shopping aren't always conducive to each other — or for those wanting a quick in-and-out trip. They go on to note that malls located off highways and interstates are likely out of the way for shoppers, as well.

However, they do realize that supermarkets in an atypical setting will generate great interest, and grocers themselves are continuously looking for prime locations to expand. Should a residency in a local shopping mall work for both parties, "then so be it."

And, hey, grocery stores aren't the only ones to fill the void. Cineplex, Canada's largest movie chain, will be opening 10-15 locations of its latest concept — the Rec Room — across the country, with a Toronto location opening this summer. As theatre revenues have fallen over the years with the emergence of online viewing, streaming and piracy, this venture aims to attract millennials and baby boomers with arcade games, axe throwing and fine dining experiences.

There seems to be much excitement for Newmarket's food market, and the varieties of grocery stores being added to shopping malls. While food markets will help boost local business among producers and artisans, consumers will find themselves with a one-stop shop for their necessities.

The future of the shopping mall may be less clothes-based than usual, but it sure will be tasty.