Stressed at school: The rise in anxiety among teens 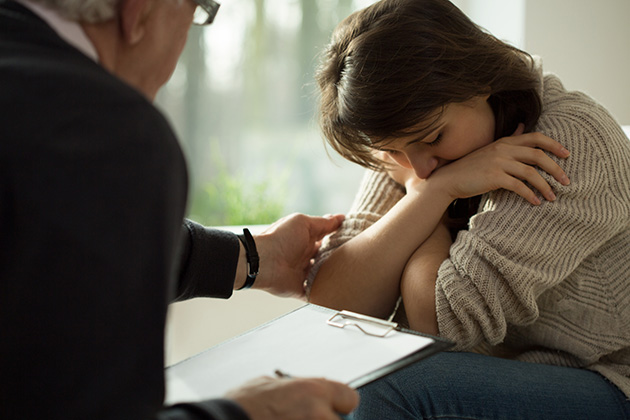 One of the most difficult and often frustrating tasks I have to perform as a school principal is that of working with students who have high rates of absenteeism. Students miss school for all sorts of reasons, and many of those are beyond their control to overcome without some sort of intervention or assistance from someone, either the school or another adult.

In my New Hampshire community, the single biggest reason that keeps students with high rates of absenteeism from attending school can be attributed to anxiety and depression. Over the last decade, I have noticed a sharp rise in cases of anxiety and depression. I have a feeling I am not the only school principal who feels this way.

In a recent New York Times Magazine article, writer Benoit Denizet-Lewis asks the question, "Why are more American teenagers than ever suffering from severe anxiety?"

Throughout the article, Denizet-Lewis profiled the story of Jake, a University of North Carolina at Chapel Hill student who in 2015 at 17 suddenly discovered that his greatest fear of all — the fear of failure — had caught up to him. Jake's parents described the day when Jake "ran 150 miles per hour into a brick wall," according to his mother.

Denizet-Lewis wrote, "He refused to go to school and curled up in the fetal position on the floor. 'I just can’t take it!' he screamed. 'You just don't understand!'"

Jake became frozen, unable to go to school for fear that people were judging him. His fear and anxiety translated to physical sickness — stomach pains and migraines. His situation worsened, and two months later, he tried unsuccessfully to end his own life. Jake was hospitalized for a few days and released, but his downward spiral continued.

He had fallen into a vicious cycle where he was too anxious to go to school, but the more school he missed, the more anxious he got. His anxiety morphed into hopefulness, despair, and ultimately, depression. Does Jake's story sound familiar to you as an educator?

According to this 2017 Child Mind Institute report, depression and bipolar disorders affect 14 percent of teens age 13-17. Even more startling, anxiety disorders are considered the most common mental health disorder among teens, with nearly 1 in 3 teens meeting the criteria for an anxiety disorder by the age of 18. When breaking down this data by gender, girls have a depression rate that is nearly twice that of boys and are found to have anxiety disorders more often than boys.

Lastly, the Institute notes that depression and anxiety are on the rise. The report notes that the number of teens with depression is up 37 percent between 2005 and 2014, and high school students today have more anxiety symptoms and are twice as likely to see a mental health professional as teens in the 1980s.

It should come as no surprise that the prevalence of teens with suicidal thoughts is also on the rise. According to this recent Economist article, "Over the past decade, the number of American children and teenagers admitted to children's hospitals for reporting suicidal thoughts has more than doubled. Some have not received help in time; after declining for years, the suicide rate for 15-to-19-year-olds shot up between 2007 and 2015, increasing by 31 percent for boys and more than doubling for girls."

The article went on to suggest that psychologists are trying to understand the cause for this. There are a few theories. One suggests that the increase in violence and mass shootings is having an impact on teens.

Another theory connects the amount of time teens spend in front of screens and on social media as a cause. In this MultiBriefs Exclusive, I explored this topic in more detail by asking whether too much technology was a bad thing for kids.

This second theory seems to carry more weight. According to the Economist, "A big new study suggests a different explanation for teenage melancholy — the many hours young people spend staring at their phone screens. That might be having serious effects, especially on young girls."

The Economist article went on to state that "adolescents who spent more time on new media — using Snapchat, Facebook or Instagram on a smartphone, for instance — were more likely to agree with remarks such as: 'The future often seems hopeless,' or 'I feel that I can't do anything right.' Those who used screens less, spending time playing sport, doing homework or socializing with friends in person were less likely to report mental troubles."

If you know a child is suffering from anxiety, what are some suggestions you can give? The Anxiety and Depression Association of America offers these tips for parents:

What else can schools do to help? One strategy I have found intriguing is to take the approach of embedding mindfulness practices and habits into classrooms. In this MultiBriefs Exclusive, I explored that topic in greater depth.

Students and adults of all ages can benefit from some explicit training and exposure to mindfulness as a way to reduce toxic stress and improve the health and well-being of the body, mind and soul, which I believe can ultimately lead to lower amounts of depression and anxiety over time.