Strategies to engage girls in STEM 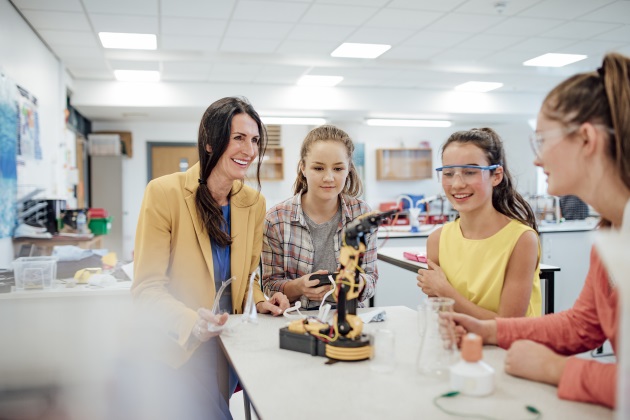 For at least the last decade, there has been a push in our profession nationally to find ways to engage more girls in STEM-related courses and careers. This push has not gone unnoticed to me in my own New Hampshire high school, where currently more than 50 percent of students enrolled in AP Calculus and 80 percent of students enrolled in AP Biology are girls. The statistics are similar for other high-level STEM courses.

What’s more, girls are performing as well, if not better, academically in these courses as boys. I attribute some of our successes in this area to decade-long K-12 emphasis on performance tasks and the engagement by all learners in authentic learning tasks that measure deeper learning. Our approach is backed by research that offers schools strategies on how to engage girls in STEM.

In a recent EdWeek blog, Sarah Sparks reported on a recent study in the journal Psychological Science, which concluded that girls "persevere longer and are more engaged in science tasks when they are asked to ‘do science,’ rather than ‘be scientists.’" In the study, researchers engaged girls ages 4-9 in a game involving the scientific method.

For some, the game was introduced as "let’s do science," while for others, the game was introduced with the phrase "let’s be scientists!" Girls who were asked to "do science" stayed engaged with the game longer than girls in the other group. Marjorie Rhodes, associate professor at NYU’s Department of Psychology and senior author for the study, wrote: "Describing science as actions, by saying ‘let’s do science,’ leads to more science engagement than does describing science in terms of identities, by asking them to ‘be scientists.’"

She went on to state, "These effects particularly hold for children who are the target of stereotypes suggesting that they might not be the kind of person who succeeds in science — in this case, girls."

Perseverance, which is sometimes referred to as grit, is not a new idea, and certainly not new to the educational field. In recent years with the rise of personalized learning models such as competency and proficiency-based learning systems, schools have been taking a hard look at how they teach and assess various work study practices such as grit and determination. In this 2014 MultiBriefs Exclusive, I wrote about the importance of grit in a positive school culture.

I referenced a study by the Stanford Center for Opportunity Policy in Education (SCOPE) that found that schools that regularly engage in deeper learning strategies and student-centered practices see an increase in academic achievement. The study followed two school models with demonstrated evidence in developing high levels of proficiency for minority and low-income students, Linked Learning Alliance and Envision Schools.

The study found that in both of these school models there was a culture that consistently asked students to work through challenges and obstacles in an effort to foster the development of grit and determination in students.

For girls, elementary school educators should take note of these recent studies that suggest for to foster engagement by girls in STEM-related courses and programs. As Rhodes suggested in the study, "the roots of gender disparities in science achievement take hold in early childhood. This research identifies an element of children’s environments that could be targeted to reduce early gender differences in science behavior among young children."

The messaging that children receive from teachers and other adults, as well as television and media, seem to center around the identity model of "let’s be scientists!" as opposed to the action model of "let’s do science." Educators can turn this tide by being cognizant of this fact and taking opportunities to change that messaging for girls at a young age. The result may also be a payoff for boys, too.