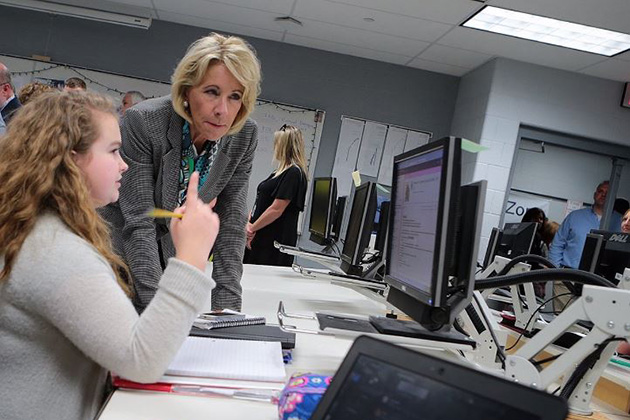 Betsy DeVos' controversial appointment to head the Department of Education turned many heads, but one thing that states found positive at the time was her announcement that states will retain autonomous control over key education policies.

However, just a few months into the new administration, the Department of Education is already facing friction with the states due to its critiques of the Every Student Succeeds Act (ESSA). The department is openly skeptical about various elements of ESSA, including the use of Advanced Placement (AP) exams in state accountability systems as well as the law’s long-term goals.

According to many state leaders, the first set of feedback is both irritating and confusing.

The Council of Chief State School Officers has said that the feedback is "too prescriptive in certain areas and goes beyond the intent of the law." The new federal K-12 law was supposed to let the states call the shots when it comes to accountability.

Delaware was told that its proposed use of AP courses for measuring college- and career-readiness isn’t up to par, while Louisiana and Tennessee got similar plans approved. While Delaware made some changes in how they will use science and social-studies test scores, the state is not making sweeping changes in measuring AP and post-secondary readiness.

In feedback to Nevada, the federal Education Department suggested changes in the core academic-achievement indicator. Since then, the state has submitted a revised plan that will measure academic achievement, school quality and the student-success umbrella without science tests.

The department has said that they are neither approving nor denying any proposal but rather strongly suggesting changes to comply with all statutory requirements. The feedback to the other states included Connecticut, which was told that the use of science test scores in accountability is unlawful, while Louisiana and Tennessee got similar warning flags.

All in all, the Education Department has asked for more details on a range of issues, demanding more accountability. The states simply want a well-balanced plan that will help them take advantage of ESSA’s flexibility and pass legal muster but without getting too complicated.

What these actions essential show is that the end of federal control of education is not going to happen anytime soon.

A lot of educators were hopeful about changes in education policy under the new administration. Now, most state leaders are expressing their frustration and have said that nothing has changed from the Obama administration.

In one of her tweets, Betsy DeVos claimed that the actions by her department aimed to do what was best for children while still giving states flexibility and local control.

Establishment Republicans indicated that they have attempted to negotiate a good “bipartisan” deal and turned education policy back to the states. After the fierce backlash from the states, these same Republicans are now quickly distancing themselves from DeVos’s department.