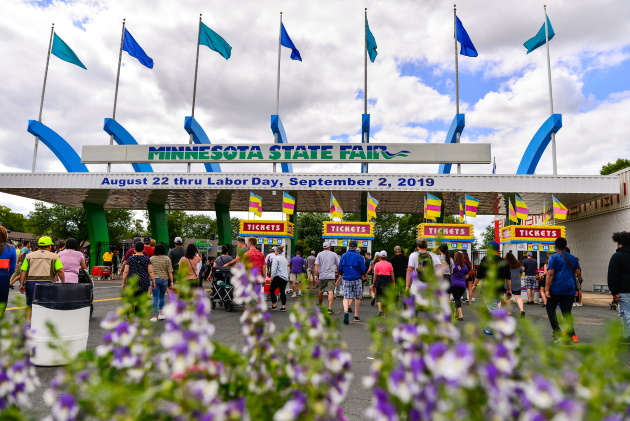 The Minnesota State Fair is arguably the nation's best.

Beginning in 1841 in Syracuse, New York, state fairs have convened largely to showcase and celebrate livestock and agriculture. Over the years, these fairs evolved into carnivals, notable for their “step right up!” revelry, rickety rides, freak shows, unhealthy foods and unwinnable games.

Today’s modern state fairs retain some of those elements but on a much, much grander scale. And with many of them now in their second century of existence, there’s plenty of history and tradition to celebrate.

For most folks, attending a state fair is a fun and inexpensive outing that offers something sure to interest and entertain the entire family. For the 4-H types, there are exhibits and competitions focused on agriculture and livestock.

Midway rides, games and musical events provide nonstop entertainment. And yes, there is funnel cake — along with just about anything else that can be rolled in batter, dipped in oil, deep fried and served on a stick.

Fairs across the country seem to be vying for most outrageous honors when it comes to sinful new food offerings. For example: fried Jell-O, chicken-fried bacon, hot-beef sundaes, deep-fried butter balls — and a Texas State Fair specialty — the funnel cake bacon queso burger.

Waistlines may suffer, but it’s all in good fun — so start making plans to visit at least one of our five favorite American state fairs.

In 2018, 2.05 million guests hit the turnstiles during the 12-day event, posting a record daily attendance of 270,426. This fair is world-renowned for serving the least healthy food ever fried by man. Of course, there are the midway rides, big-name entertainment and ubiquitous livestock competitions, but many fairgoers come here simply to feed their faces.

America’s fourth largest state fair also holds the distinction of being the oldest. The nation’s first state fair was held in 1841 in Syracuse and it lends credence to the fact that such fairs aren’t exclusive to America’s heartland. Both the event and its venue have undergone a huge transformation over the years, most recently in 2015 with a $50 million restoration of the fairgrounds on the shores of Onondaga Lake.

An amazing schedule of activities and events, ranging from an exhibit featuring an 800-pound butter sculpture to piglet races to birds of prey demonstrations, routinely attracts more than a million visitors annually. Foodies flock to the fair for the Taste New York Food Truck Competition that hosts 40 of the state’s top food trucks. 2020 dates: Aug. 26 – Sept. 7 (Labor Day).

Billed as “the biggest event on the East Coast,” the Big E Fair brings all of New England together (that’s six states, including Massachusetts, Connecticut, Maine, New Hampshire, Rhode Island and Vermont) for this annual festival staged in West Springfield, Massachusetts. All things being equal, the fair’s Avenue of States features full-sized replicas of all six original state houses.

Each state house serves ambassadorial duty with exhibits and demonstrations keyed to its history, industry and culture — and tasty samples of its favorite foods.

Grab a bite of lobster or baked potato at Maine House or perhaps some Ben & Jerry’s ice cream or maple candy at Vermont House. You get the picture. 2019 dates: September 13-29.

The state fair is Iowa’s biggest event — and it was ever more so in 2019 when a record 1.17 million visitors and a couple dozen Democratic presidential hopefuls congregated in Des Moines for a festival of fried foods, carnival rides, farm animals and campaign speeches. In addition to its quadrennial significance as a campaign stop, the Iowa State Fair is famous as home (since 1911) to its now-iconic butter cow sculpture, and for having more food vendors (200) than any fair in the country.

While there’s plenty of big-name entertainment — Toby Keith, Zac Brown Band and Hootie & the Blowfish among those performing in 2019 — the real emphasis here in Iowa is on the food — and serving it on a stick. More than 50 items are available in stick form, including apple pie, sausage and waffles, bacon-wrapped riblets and deep-fried brownies. 2020 dates: Aug. 13-23. 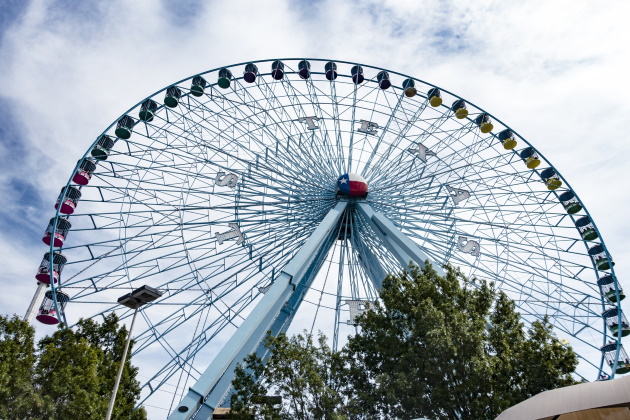 The Texas Star Ferris wheel was the nation’s largest until recently.

They say everything is bigger in Texas, and the state fair is certainly no exception. It is the largest and most widely acclaimed fair in America, a massive enterprise attracting more than 2.2 million visitors annually and generating some $50 million for the Dallas-area economy.

Symbolic of the 24-day extravaganza is “Big Tex,” the instantly recognizable 55-foot-tall cowboy statue that serves as the event mascot. He is (you guessed it) the world’s tallest cowboy. Fair Park was home to the nation’s tallest Ferris wheel (212 feet) as well — until it was recently displaced by taller wheels in Orlando and Las Vegas.

Fair-related festivities include a parade in downtown Dallas, an auto show, an exhausting roster of agricultural and livestock shows and exhibits and the traditional “Red River Rivalry” college football game between Oklahoma and Texas.

The fair has long been a pioneer in the development of deep-fried foods and some recent additions include fried banana splits, chicken-fried bacon, deep-fried chicken noodle soup and deep-fried Fruit Loops. 2019 dates: September 27 – October 20.