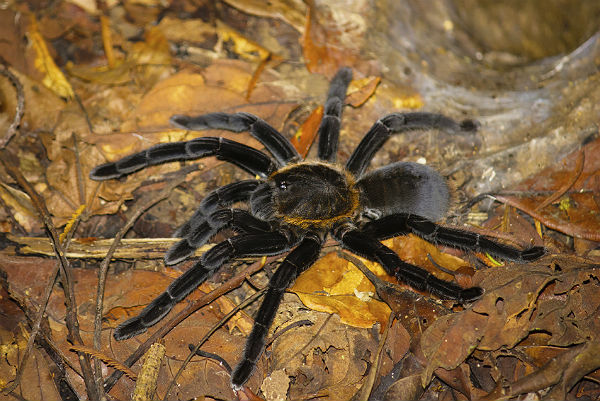 Venom from the Haplopelma doriae tarantula family may be used to form an effective pain reliever.

Pain is a serious health problem that affects more Americans than diabetes, heart disease and cancer combined. Acute pain might be mild and short-lived, lasting from a moment to weeks or months and disappearing when the underlying cause has been treated or healed, but chronic pain persists.

A recent market research report indicates that more than 1.5 billion people worldwide suffer from chronic pain, and approximately 3-4 percent of the global population suffers from neuropathic pain, with incidence rate increasing with age. The annual cost of chronic pain is as high as $635 billion a year, which is more than the yearly costs for cancer, heart disease and diabetes.

Past studies have found that in humans, one of the most common pathways involved in chronic pain is Nav1.7. Indifference to pain among people who lack these Nav1.7 channels is related to a naturally-occurring genetic mutation. Therefore, blocking these channels has the potential to turn off pain in people with normal pathways.

Part of the search for new pain-killing drugs has focused on the world's 45,000 species of spiders, many of which kill their prey with venoms that contain hundreds and even thousands of protein molecules, some of which block nerve activity.

A new study in the British Journal of Pharmacology suggests that spider venom could lead to a more effective treatment for the millions suffering with chronic pain. Although spider venoms are a complex cocktail containing salt, proteins and organic molecules, peptides are the primary components.

This latest study was led by Professor Glenn King of the Institute for Molecular Bioscience at The University of Queensland in Australia. He and his researchers chose spider venom peptides in their search for more effective pain relievers, but they were challenged by the existence of more than 9 million different types.

The team created a system called a "high-throughput fluorescent-based assay," which allowed them to quickly search for peptides in spider venom that may block the Nav1.7 pathway, screening the venoms of 205 species of spider. They found 40 percent of venoms contained at least one peptide able to block the Nav1.7 pathway in humans, and they narrowed this down to seven promising compounds.

Of these, the team identified one that was likely to be the most effective pain reliever — Hd1a from the Haplopelma doriae, tarantula family. Not only does this compound block the human Nav1.7 pathway, it is chemically, thermally and biologically stable, meaning that it has the strong potential as an effective painkiller in humans.

Chronic pain is insidious. This study with its newly-created system will hopefully accelerate the development of a new class of painkillers with the potential of treating those who suffer from chronic pain.