Speed vs. accuracy in training and self-defense 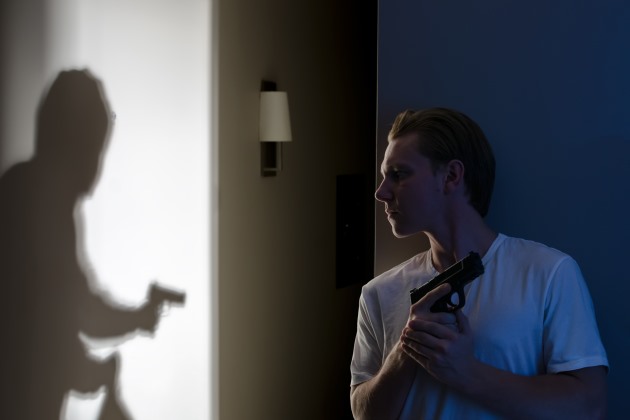 There’s a continual debate in the gun training world between whether you should train accuracy or speed.

It’s a great question, but most people presume that the answer is either-or. It shouldn’t be.

Let’s start by talking about what "accuracy" and "speed" are.

They are 100 percent dependent on the context.

And the context is completely different between an IDPA match and a self-defense situation.

Frankly, you don’t know what the situation is going to be when you find yourself in a fight for your life where you need to use your firearm.

You and your attacker may be the only people around for miles, and you have a safe backstop where it may be appropriate to push speed at the expense of accuracy…or something like the mythical "knife to the throat of someone you love" hostage scenario with neighbors on the other side of the wall, where accuracy is necessary.

As an example, from concealment, I know I can consistently hit a man-sized target at 21 feet in about a second. If a head shot is required, it’s more like 1.25 to 1.5. If there’s a safe backstop and I know that a complete miss is acceptable, I can push it to 0.8-0.9 seconds and make hits about half the time.

Change the distance and those times change.

You don’t need to know exactly how fast you are except to measure progress.

I don’t know all of my numbers…and I don’t think about what speed I’m going to shoot at or forcing speed…I just do my draw stroke and presentation smoothly, and shoot whenever I’ve got an acceptable level of accuracy. The target is the ultimate guide as to whether or not I’m shooting at the right speed.

The fact that you don’t know what kind of situation you’ll face when you need to use a firearm means that you need to work on both speed and accuracy…not either-or.

But how in the heck do you do that with limited time and money to train?

That’s a question that I continually get from civilians, law enforcement, military, and even "elite" military shooters.

The reality is that if you train correctly, you get both.

I won’t get too "scientifical," but it’ll help a lot to understand a little bit of simplified brain science.

I need to start out with a quick description of two parts of the brain.

If you think of the brain as having an inner and outer layer, the midbrain is the inner layer. It connects the rest of the brain to the spine. It handles most basic bodily functions, does things very quickly and basically follows predefined scripts…like macros.

The outer layer of the brain is the cortex. That’s where conscious thought happens. The cortex allows humans to do amazing things, but it’s not as quick as the midbrain and signals still have to go through the midbrain to get to the rest of the body.

Which leads us to…

When you shoot, the brain sends a series of signals (motor impulses) to your muscles…flex here, relax there, etc. until your pistol goes from the holster to firing an accurate shot on target.

You can either trigger each of these signals from your midbrain or from your cortex, depending on whether you have to think about the individual steps or whether you can execute the entire sequence at one time.

If you have to think about the steps to make an accurate shot, you have to use your cortex, which will send the signals one-by-one through the midbrain and to your muscles. These extra steps are slow.

When your midbrain knows the entire process, the cortex tells it to "go" and it runs the entire sequence of movement automatically, eliminating a quarter-second or more delay, and the motor impulses will be delivered to your muscles quicker and with less effort.

The more of the process you can shift to your midbrain, the quicker you’ll be.

If you’ve given your midbrain a script for accuracy, you get accuracy plus speed.

If you’ve given your midbrain the option of ad-libbing the shooting process, you get speed plus random performance. That’s why precise practice is so important.

So, how do you use your faster midbrain to shoot rather than your cortex?

Simple…you practice a skill until you can execute it without thinking about the individual steps.

That frees up your cortex to do important things like deciding whether or not a target actually needs shooting, being aware of your backstop and what’s around your target, and thinking one, two or five steps ahead for how to physically remove yourself from the situation. As important as shooting skills are, safety and shoot/don’t shoot discernment are as, if not more, important.

So, it’s really important that you do the shooting fundamentals on autopilot so that your cortex can make smart choices about whether or not to shoot and what to shoot.

This isn’t something you can do in a three- to five-day class…but it doesn’t have to be difficult or expensive.

If you’re smart about your training, you don’t have to work nearly as hard as people think you do to make it happen.

2. Reduce your movement during the draw stroke.

Every extra inch of movement during your draws stroke takes time.

The more complex your draw stroke, the longer it will take to do.

The more changes in direction during your draw stroke, the longer it will take and more likely it’ll go off the rails at high speed or under stress.

When you remove excess movement from your draw stroke, you get three huge benefits.

Some of these concepts are a little bit complex…but actually using them can be incredibly simple if you have a plan to follow.

And that is exactly what the Draw Stroke Mastery system is all about.

It is a road map of drills and tweaks that will help you improve as a shooter quicker and easier than any other training that’s currently available.

That boost in performance could dramatically change the outcome the next time you shoot…whether it’s for a qualification, a competition, or when lives are on the line.