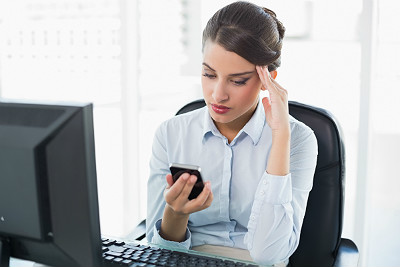 Many businesses provide leaders with smartphones or reimburse employees for their use of their private phones for business use so that productivity is increased. I have always wondered if this practice actually increased productivity or if having the world at your fingertips was a distraction.

A group of researchers at Kent State University seems to have provided an answer.

I decided to read the study again and replace "student" with "employee" and "GPA" with "productivity." A light bulb went on, and I came up with an interesting idea.

Just for fun, I asked a colleague to keep track of his smartphone use for one week. I did the same. We examined the same categories as the KSU researchers, but we logged phone usage in two distinct categories, productive or a distraction.

Productive was defined as adding useful information to our focus at the time of the usage or emergency situations that needed our immediate attention or response within 30 minutes. A distraction was anything else. The nonemergency calls, checking sports scores, fantasy sports, spouse calls and texts, jokes, unnecessary CC of emails, selfies, Internet searches, you name it.

Guess what? The way we were using our smartphones proved to be very distracting. We have no way to measure the loss of productivity, but the number of distractions was glaring. It was an amazing unofficial study.

I then posed the question, "How can we make our smartphones a productive tool? After much thought and discussion with my colleagues, we decided that we needed to change when and how we use our smartphones.

The following guidelines (rules) were established for our smartphone use for our organization.

I will admit it is difficult to break my old smartphone use habits. It is tempting to just respond, like a slave to its master, when my smartphone rings. Wish me continued self-discipline and strength.

C. Fredrick Crum is the president and founder of Effective Leadership Now.Org. He has spent more than 30 years working with leaders and leadership teams to improve their performance.

What do you think of smartphones?