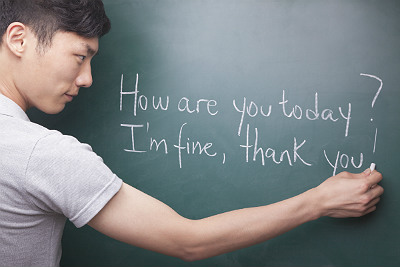 Today, the vast majority of the English spoken around the world is not between native speakers — in actuality, only about 25 percent involves L1 speakers.

Such use of English as a contact language between people who don't have the same mother tongue and often share no other language is referred to as English as lingua franca (ELF). It is currently the most prevalent way English is used globally and becoming more so each year.

In light of this trend, some teachers are beginning to ask themselves how well they are preparing their English language students for international communication that may not involve people from the U.S., U.K., Canada, New Zealand or Australia, labeled inner circle countries by Kachru in 1985. If language instruction is solely oriented at this small cross section of English speakers, will students be able to interact successfully with the other 80 percent who use English?

"If we just focus on native speaker accents, we are not preparing our students for the reality of the world," says Laura Patsko, ELT research manager at Cambridge University Press who has created a website with ELF resources for teachers. She has developed lessons to assist learners in improving what she calls receptive pronunciation skills.

"Accents are systematic, rather than merely mistaken speech," she explains. By giving students exposure to a variety of accents and guiding them in analyzing patterns, teachers can help students gain confidence and ability in understanding unfamiliar accents.

In my personal experience, voices with certain accents featured on listening tracks become a target of ridicule by my students. It's understandable given the proliferation of movies and other media that use accents to elicit laughs. Depending on how far behind schedule we are, I may seize the opportunity to open up a discussion on why they feel justified in mocking certain accents while on the other hand they accuse the textbook publishers of stereotyping Latin American speakers.

Patsko also addresses this issue on the British Council Voices website, "Using listening activities featuring non-native accents can help students accept the reality of accent variation, and challenge negative perceptions of their own accent and others."

Yet many teachers and students alike believe native speaker pronunciation should be what is modeled and striven for in English classes. When an individual is living in an inner circle country — as is the typical ESL learner in the States or Canada — perhaps this stance holds validity.

However, ELF implications go beyond pronunciation to encompass the validation of the student's process and background. Barcelona-based English teacher and materials writer Ben Goldstein recommends that teachers "encourage learners to be proud of their own voice and help them feel confident and positive about their language abilities."

Discovering what their students' personal goals and priorities are in learning English can help teachers decide how or whether ELF fits in their teaching. One of the courses I teach follows an exam preparation syllabus, so in this case I wouldn't stray from the set attainment standards in terms of accurate grammar use or anything that may leave my students unprepared to pass the exam.

Accordingly, leading ELF researcher Jennifer Jenkins mentioned in a 2012 article that she saw little evidence that the global examination boards, such as Cambridge ESOL, IELTS and TOEFL, were taking account of ELF or willing to engage in debate with ELF researchers. Yet other aspects associated with ELF are perfectly suited to this group.

In a recent Facebook live event by Cambridge English Teacher, people from around the globe posed questions on the implications of English as a lingua franca in English language teaching. Among the concerns voiced was the potential simplification of the English language, for example the elimination of the -s termination in third-person verbs. Other questions and comments pointed to the fear that the language will decline due to deviations or misuse.

Co-facilitator Dr. Martin Dewey, senior lecturer at Kings College London, reframed the term misuse in the ELF context: "Misuse would be perhaps more appropriately defined according to success in communication or lack of success rather than according to a set of language norms or forms."

Another area drawn into question by ELF proponents is the assumption that learners are solely interested in the culture of the inner circle of English-speaking countries as typically reflected in English coursebooks. In a recent article, Goldstein suggests supplementing course book content to include real-life examples and introducing literature that explores alternative voices by authors from countries where English has an official or special status such as India and Kenya.

While most ELF research and commentary focuses on non-native speakers, Goldstein's ideas could also work in an L1 English classroom to help prepare students to communicate effectively with a larger circle of English speakers giving them exposure to the thoughts and experiences of people in the 74 other countries where English is used proficiently.

"As part of their program of study, learners of English need also to be helped to develop intercultural competence: the sensitivity to other cultural norms and the ability to adapt and function appropriately when interacting with people from other cultures," writes Cem Alptekin, faculty at Boğaziçi University in Istanbul, Turkey.

Framed in this fashion, the exploration of English as a lingua franca holds something of value for all language learners regardless of where they happened to be born.