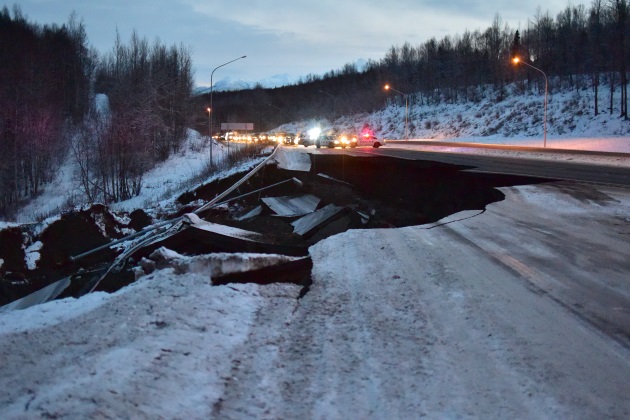 This past year we have witnessed many U.S. communities get turned upside down, even destroyed, by significant weather events. We have also witnessed significant developments on the climate change front, as the Paris Agreement lives on despite the deregulation of U.S. environmental protections that is underway, including clean water protections.

Who needs water? Pass the egg nog! Even the Grinches among us have to acknowledge it’s impressive to watch disaster-recovering communities maintain seasonal traditions and create new ones in this record-breaking year, from the sunny south to snowy Alaska.

Northern Alaska boasts a town called the North Pole, with reindeer (domesticated caribou) herds to round off all Santa-related themes. In southern Alaska, Santa Claus was far from everyone’s minds when a 7.0 earthquake, with an epicenter at Point McKenzie, hit Anchorage and surrounding communities at the end of November, causing millions in damage. While earthquakes are common there, this one is the largest since 1964’s 9.2 quake.

Even long-time Alaskans were stunned by the earthquake’s magnitude and its 5,000 or more recorded aftershocks. Since Dec. 4, the area has had 120 aftershocks registering more than 3.0.

Anchorage schools were closed for a week after the earthquake, with a dozen still closed for repairs as holiday break nears. Schools are usually their own seasonal epicenters. But with so many schools still in disarray and catch-up mode, residents have contributed to children’s holiday revelry in unique ways.

Consider the anonymous donor who gave $500 for children’s toy purchases that were handed out by a Secret Santa in Eagle River, Alaska. Eagle River was especially hard hit by the earthquake; its middle school is closed for the rest of the year due to damages. But Eagle River and Anchorage move forward with solstice festival, lighting and lantern events and a Christmas Eve candle-lighting ceremony.

The same holiday spirit is found in southern communities that experienced the ever-powerful Hurricanes Florence and Michael in autumn.

Both hurricanes dumped 30 inches in the south, and it’s now coming to people’s attention that over 650,000 private wells have been exposed to harmful contaminants — some call it a toxic stew — but few have been tested because it’s not required by law. Some 2.4 million North Carolinians drink well water — the fifth highest in the nation.

Given that there is still so much to uncover about impacts, communities can only slowly recover, but people remain determined as financial deals and insurance details get settled. A $50 million bond has just been approved by Florida panhandle Bay County Commission for “debris removal and stormwater system repair” two months after Michael hit.

Bay County’s Mexico Beach and Panama City were hit especially hard, but this didn’t stop one local tradition. A Parker, Florida Santa passed out goodies to area children from a local fire truck in an annual event that dates back 64 years.

The truck covers 24 miles worth of streets while children await in intense anticipation. The Panama City News Herald reports: “As the fire truck snaked down each street in the city, sirens blaring, kids were either already waiting outside or would run out of their homes toward the roadside to pluck the fallen candy from the ground.”

A Norman Rockwell moment might be hard to come by for many children, so the visit was definitely enjoyed by all.

Out at the beach, residents held the annual Beaches Christmas Parade in early December. The usually highly attended Jaycees Christmas Parade had to be postponed a few weeks, but it occurred with 100 participating church, school, business, civic, and police/firefighter groups and floats in downtown Panama City.

This parade symbolizes the rebuilding spirit. Its theme, “Hope for the Holidays” has everyone crossing fingers for better weather fortune in the coming new year.

We also need better human fortune. All those in disaster-impaired communities commemorating the Jewish holiday Hanukkah, this year occurring from Dec. 2-10, also sadly commemorated those eleven individuals murdered at Pittsburgh’s Tree of Life synagogue on Oct. 27.

From weather-related disasters to heinous hate crimes, like the Pittsburgh shooting and beyond, people are eager to celebrate a new year. 2018 will linger for decades to come as a year requiring immense survivor resilience. And patience. Lots of patience.