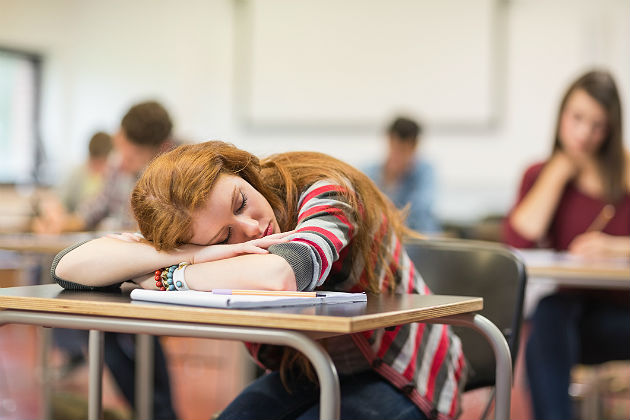 The American Academy of Pediatrics published research this summer that will likely become a hot topic at many school board meetings in the coming months and years. The report, entitled "School Start Times For Adolescents," studied the sleep patterns of teenagers.

The researchers determined, with no surprise, that teens are not getting enough sleep, and it is impacting their ability to perform in school. According to the report, teens need at least 8.5 hours of sleep each night. The report called upon schools to move their start time to a more reasonable 8:30 a.m. to accommodate this increased sleep need.

Mind/Shift blogger Nancy Shute wrote more about the impact this report has on schools in her article, "Pediatricians Say School Should Start Later For Teens’ Health." Shute reported that currently, just 15 percent of high schools in America have a start time of 8:30 a.m. or later, and 40 percent start school before 8 a.m.

Shute went on to write that studies have found that lack of sleep in teenagers increases the risk of traffic accidents and makes them more vulnerable to depression and obesity. Teens who get more sleep do better academically, with better standardized test scores and better quality of life.

The report is sure to refuel the debate over the pros and cons to later start times for high school students across the country. While educators often recognize the health benefits of a later start time, there are several logistics that school districts must wrestle with before making such a change in their systems.

As USA Today writer Ted Velkoff pointed out in his article "Later Start Times Cost: Opposing View," the impact would be huge for many school districts and cannot be ignored. Such a change would impact family schedules, elementary schedules and transportation concerns for districts that use their buses for multiple runs with multiple grade levels.

These impacts, combined with the high demand for time that high school students face for after school activities like sports, work and family responsibilities to care for younger children, must be accounted for before a policy change could ever be considered.

Even with all those logistics to be addressed, school districts are engaging in the discussions. For example, Chesterfield County, Virginia, schools took up the issue in a school board meeting earlier this month. The Washington Post also reports that Fairfax County, Virginia, made some small gains towards this initiative by approving a plan to have high schools start after 8 a.m. beginning next school year.

Educators in Fairfax County estimate that the initiative, which will impact 57,000 high school students, will cost taxpayers approximately $4.9 million, with most of those funds used towards the purchase of additional buses. With this decision, Fairfax County will join 70 out of the 95 Virginia school districts who will now have high schools starting after 8 a.m.

While some states like Virginia have been able to make some gains, other more rural states have other logistical issues to contend with. Consider my high school in New Hampshire, for example. Our start time in 7:20 a.m. Because of our rural geography and decentralized population, our school athletes often have to travel as many as two hours one way to compete against another school of similar size for athletic contests.

For us to consider a change to our start time, we would need the other high schools in our state to make the same concessions, otherwise our athletes would be missing large amounts of class time to travel to games each day. These games have to end before the sun sets as many of these schools do not have the equipment to make night games possible.

The American Academy of Pediatrics report on start times isn't a new idea for schools to consider, but it is for the first time highlighting significant evidence that connects the health of our children with their ability to perform in school. Given our nation's efforts to increase the rigor and academic promise of our nation's youth, this report is one that cannot be overlooked.