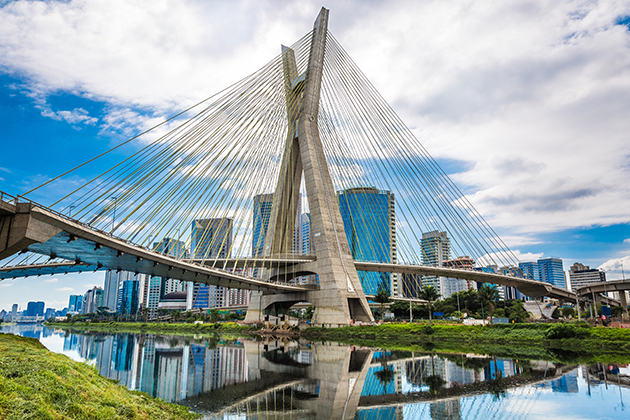 The transformational power of urbanism has captured the imagination of policymakers around the world in recent years. In particular, the people-centered wave of "new urbanists" have proved seductive.

Yet too many planning departments still resort to old top-down ways of thinking — the modernist quest for the drive-in utopia. This is particularly so in the under-resourced local governments of the developing world.

However, while former British colonies in Africa and Asia are struggling to break out of the blueprint, some cities in Latin America have been at the center of attention. The region has become something of an urbanism laboratory.

Brazil's Sao Paolo is just one example, as it's new pioneering master plan illustrates, since it was released in July 2014. But can the ambitious plan survive political change?

Keeping up with explosive growth

Sao Paolo is a classic case of the demographic explosion being experienced by cities across Latin America. With an official population of around 12 million, it qualifies as one of the world's mega-cities. However, taking in the wider metropolitan region sees that number rise to 20 million. The city's GDP is roughly equivalent to that of Turkey.

With growth, of course, has come cars. Unprecedented congestion has brought Sao Paolo to a standstill. While new startup Voom has provided a solution for the super-rich in the form of a helicopter version of Uber, the remaining "paulistanos" are left suffering on the gridlocked streets in overcrowded buses.

Often, the sort of innovations we have seen in Sao Paolo begin with a charismatic official. In this case that official was Fernando Haddad, the city's mayor since early 2013 until he left office earlier this year.

Haddad, of Brazil’s Workers' Party, was behind the much-hyped strategic master plan. The plan aims to attack the city’s mobility problems head-on over 20 years, with a focus is on "new urbanist"-style interventions.

That means denting car culture by getting rid of mandatory parking requirements. It also means making streets more pedestrian-friendly, which reduced traffic fatalities by a reported 20 percent from 2014 to 2015. The city has also jumped on the "car-free Sundays" (or "ciclovia") global bandwagon along the main thoroughfare Avenida Paulista, and directed housing to be built along public transport corridors.

However, perhaps most unique in the developing world is how these decisions were arrived at. They were the result of a participatory process that included 114 public hearings, 25,000 participants, and 10,000 contributions.

Radical changes to the way urban planning is done takes more than one man, one master plan and one electoral cycle. Developing new urban infrastructure requires long-term consistency and vision.

There are doubts about how well Haddad's plan can outlive the election of João Doria in January 2017, a businessman who has been described as as "Brazil's answer to Donald Trump." An ambitious politician, he has less time for creating tranquil urban spaces for cyclists and walkers than building the city up as a financial and industrial powerhouse.

Reconciling different visions for the city

It is easy to insert a few cycle lanes into a city. However, more sustainable change requires consistent political will. Sao Paolo has made some bold steps and has sparked a conversation around who the city is built for — the rich or the poor?

One superstar mayor can only achieve so much. In the nearby Colombian capital of Bogota, the "social urbanism" success story driven by former mayors Antanas Mockus and Enrique Penaloso has gone notably awry since they left office.

It is too early to tell how much of Sao Paolo's social urbanist projects will be picked up by Doria. Haddad and Doria are clearly two men with different visions and different priorities. Economic development is also a key policy concern for cities, but there needs to be an inclusive way to integrate that with social justice and sustainability.

A master plan is nothing but a set of guidelines, and advocates for sustainable urbanism need to keep up the pressure to make sure those guidelines are revisited as the city changes, and that the drive to transform Sao Paolo remains alive.