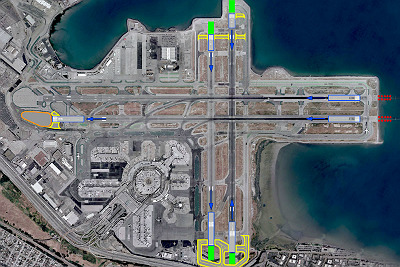 The North-South runways (01L and 01R) will be closed this summer for construction (Photo: SFO).

Travelers using San Francisco International Airport this summer are set to experience delays and frustration as runways are taken out of action for essential upgrades.

Two of the airport's four runways will be closed during the busiest period of the year for the main Bay Area airport, but the works are part of a federally-mandated project that will improve safety.

When the runways close May 17, the daily throughput of traffic at the airport will be reduced with the remaining two runways having to cope with all arrivals and departures until the work is completed in September.

John Bergener, the airport's planning officer, said the airport has been working closely with airlines to implement a system where departing aircraft will not be boarded until they have a slot to depart. Departures are likely to be the source of the biggest delays during the renovation, especially during the busy weekday morning period, between 10 a.m. and 1 p.m.

Airlines had been planning to increase service to San Francisco this year, with a growth of around 5 percent expected, including a new Aer Lingus service to Dublin. However, the runway works will cut that anticipated growth as carriers are asked to consolidate and reschedule departures where possible to help alleviate delays.

Overall, it is expected that the airport's capacity will reduce by 15 percent during the runway closures, or around 20 fewer flights per hour. This is on top of any other delays due to weather that the airport may encounter. 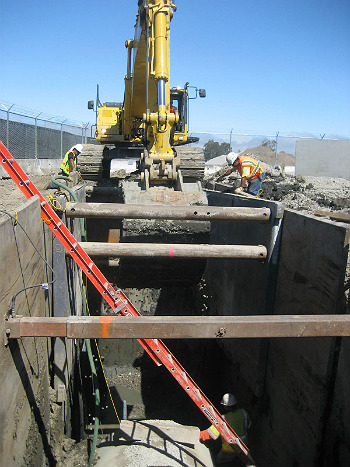 San Francisco International Airport Two of the airport's four runways will be closed for the construction of new runway safety areas.

The two runways to close are 01L and 01R, which run parallel to each other. Work will see the construction of new runway safety areas (RSAs) at the end of the runways. These are made up of a honeycombed area beyond the threshold of the runway that act as a stop zone that crumples when an aircraft enters it, bringing about a swifter deceleration to stop any overruns.

San Francisco Airport is surrounded by the water of the bay on a number of sides, and aircraft have ended up in them on a few occasions in the past. Adding RSAs is seen as a sensible and essential safety procedure, and it has been in the planning since 2008.

The airport's other set of parallel runways has already received the stop zones. Since the works have been federally mandated, financing has come from the government, as well as airport general revenue bonds.

San Francisco Airport, which is California's second-busiest gateway and a major transit hub for the region, has also seen the construction of a new control tower between terminals 1 and 2, which is set to open this summer. In response to local neighbors' concerns about increased noise during the runway works, the airport said it was constructing the RSAs on both runways simultaneously to enable the quickest completion of the works.

While some extra noise would be experienced by residents under the flight path of the other runways, the airport states that "SFO's Fly Quiet noise abatement program will continue, and airlines will be ranked and graded for their use of noise-mitigating departure routes."