Running gait analysis: Not just about the feet 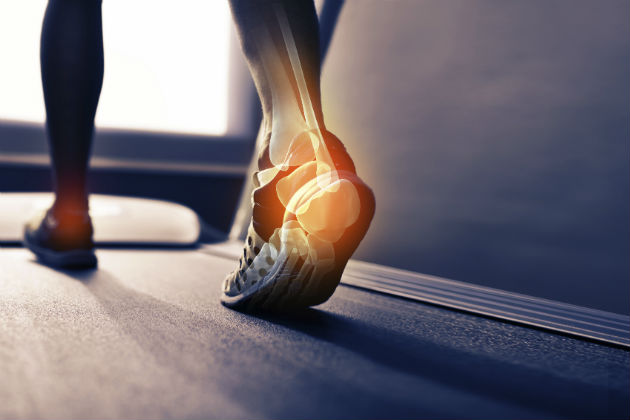 When you hear the words "running gait analysis," what do you think of? Most people will envision running on a treadmill in a store while your foot motion is then observed.

And the point of this? To make sure you have the correct running shoes, of course. Words like overpronation and neutral, cushioning or motion-control shoes are usually bandied about following your "analysis."

For many people this is a worthwhile thing to do, but the observation shouldn't stop at the feet. After all, there is a lot more going on throughout the running cycle that should be of interest to a runner — especially one suffering with an injury.

We should be looking higher up the body, taking in the movement at the knees, hips and at least as far as the pelvis. There is far more value in observing these areas for injury prediction and rehab purposes than the feet alone.

So, what should we be looking for?

The stance phase is the time the foot is in contact with the ground. This starts at initial contact (be it a heel strike, mid-foot or forefoot landing) and continues as the body moves forward over the foot, through to toe off. The things we should be looking out for include:

An ideal running gait sees the foot impact the ground directly underneath the knee, which is just starting to flex. This position helps to absorb impact throughout the limb and help with stability due to its close proximity to the bodies center of mass.

A common scenario that is less than ideal occurs when the foot is out in front of the knee, which is fully extended on ground contact. This creates massive impact and breaking forces, which can lead to increased load on the shin and knee in particular and could be a trigger for the dreaded "shin splints" and patellofemoral pain.

The contralateral pelvic drop is another common problem, possibly more so in females. This occurs on the non-weight-bearing side, when the iliac crest drops below the level of the same point on the standing leg.

The reason for this is usually insufficient hip abductor strength or neuromuscular control — either way they aren't doing the job they're supposed to do. The problems this can cause include TFL and IT band overloading.

Increased hip adduction is linked to the above issue in that both are caused by abductor muscle insufficiencies and often with one, comes the other. Too much hip adduction is displayed when the knee of the stance leg falls inwards as the body moves forwards over the foot. This can cause knee issues, most commonly patellofemoral pain syndrome.

How far back the hip joint moves toward the end of stance phase often tells us how tight the hip flexor muscles at the front of the hip are. Reduced hip extension, means we aren't loading the hip flexors effectively and are therefore losing out on an explosive hip flexion moment to propel us forward.

Often, a compensation for this is to overuse the calf muscles to forcefully plantar flex and achieve this forward motion. Before you know it, you've got tight, overworked calf muscles and maybe even some form of Achilles tendinopathy.

Swing phase is the opposite end of the cycle from stance. It starts at toe off and continues as the leg moves forward through the air and finally touches the ground again out in front. It is a far-too-often overlooked aspect of the gait cycle, which can give us some really good clues regarding what could be causing an injury.

Specifically anterior pelvic tilt. This is a cheeky little compensation often employed by those with short hip flexors to allow a little more extension. It can be viewed from side on — just ensure that a runner's top and bottom half clothing are contrasting colors and tuck the top into the waist band.

The degree of peak hip flexion when the leg swings forward is another important factor to observe. A lack of hip flexion basically means a short stride length. In order to increase this, a runner will tend to compensate by fully extending the knee, flicking the foot out and impacting the ground way out in front of the knee, hip and so center of mass. This takes us back to the start of the stance phase again.

A great little quote from a course I was on recently is: "The foot will only go where the leg puts it." And how true this is! If the hip doesn't flex sufficiently, the only way to maintain stride length and so speed is to compensate by maximally extending the knee. Increasing hip flexion allows a longer stride and less need to "reach" with the lower leg.

A leg flick can occur in the first half of swing phase, when the knee and hip flex to pull the leg forward. The lower leg can sometimes be seen to flick outward, so that instead of the heel following through in a straight line, it moves to the outside first.

This is often seen as a bit of a "girly" run, and yes it is more common in females. This is probably due to reduced hip internal rotation control — therefore limited external rotator strength or neuromuscular control.

Cadence is the stride frequency with which an individual runs — i.e., how many steps they take per minute. An average runner will usually have a cadence of 160-170, with elites usually coming in above 180 strides per minute.

A slower cadence has been associated with increased loading of the joints and therefore higher injury risk. This is because in order to cover the same distance in the same time with a slower cadence, the runner must overstride. This again goes back to the point above where the foot hits the ground way out in front of the center of mass.

It has been shown that an increase in cadence of just 5-10 percent can have a massive effect on reducing loading throughout the lower limb.

Analysis can be undertaken on either a treadmill or outside on a track or any long, flat surface. There are several specialist systems available for this purpose, but one of the simplest and most cost-effective tools is the app.

There are motion analysis apps available for smartphones and tablets that allow you to record a runner and then slow down the footage to highlight peak angles and points within the cycle. Some run-specific apps will include a cadence counter, or you can get this as a separate app.

I am a firm believer in the old adage "if it ain't broke, don't fix it." I feel that if a runner is running pain-free and performing well, then don't mess with him/her. However, for runners who are suffering with either one main injury or continual nagging pains, it is well worth observing their running gait to determine if there is anything that can be done to improve form and unload the affected structure(s).

Gait analysis shouldn't stop at the feet. You can get far more important and useful information by looking further north.