Rethinking failure in the classroom 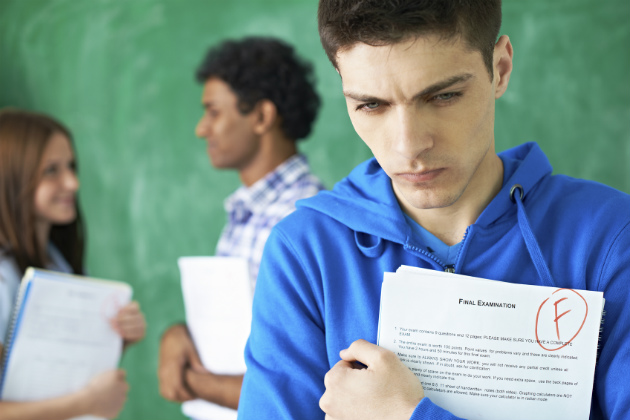 Earlier this month, The Washington Post's Moriah Balingit and Donna St. George opened up a large debate by asking a simple question: Is it becoming too hard to fail? Their article discussed how schools are shifting toward no-zero grading policies as a way to focus a student's grade on what they know and are able to do rather than to use grades as a means to motivate or punish students for their academic behavior.

Balingit and St. George highlighted large school districts like Virginia's Fairfax County and Maryland's Prince George's County that have created policies to make 50 the lowest possible failing grade. In his book "Fair Isn't Always Equal: Grading and Assessing in the Differentiated Classroom," former Fairfax County teacher turned educational speaker and author Rick Wormeli offers this strategy as one way to level the playing field and make a failing grade carry an equal weight to any other grade in the 100-point grading scale.

This movement to rethink zeros and failing grades is part of a larger philosophical shift to standards-based and competency-based grading systems. In such systems, grades represent what students learn, not what they earn.

Students are given clear descriptors of what it means to learn a concept or a skill and to what degree or level the student has mastered that concept of skill. Such systems give students multiple opportunities to reassess and improve their skills, making their final attempt the one that carries the most weight in their grade.

Proponents of such systems believe the traditional percentage-based grading system does not allow for assessment of skills and knowledge at deeper levels, and grades are influenced not just by what students learn but how they learned. Academic behaviors such as participation, effort and punctuality, while important, should not be a part of a student's academic grade.

In Prince George's County, the teacher union has voiced concerns about the move to eliminate the zero from the grading system. President Theresa Mitchell Dudley released this statement: "We have no problem being fair to students, but if they are not doing the work and not performing, and we give them a grade they did not earn, how does that make them college and career ready?"

University of Kentucky education professor Thomas Guskey offers a compromise solution, suggesting students should receive two different grades — one to represent academic learning and one to represent academic behavior. Guskey believes strongly that academic behaviors such as participation, effort and punctuality "are all really good, but they're different than achievement, and we need to report them separately."

Shortly after the Post article ran, Julia Freeland of the Christiansen Institute for Disruptive Innovation crafted a response by asking another question: Will eliminating the "F" eliminate bad school redesign? Freeland suggests eliminating a zero from a grading system doesn't necessarily mean students will be less likely to fail.

If a student couldn't learn a course or subject in the allotted time in a school year in the old system, she still won't be able to in the new system unless the school develops policy and practice to target reducing failure. The answer, Freeland believes, is a complete school redesign shift to a competency-based approach.

"Grading reforms like those profiled in The Washington Post's article will mean little if schools fail to adopt competency-based structures to provide just-in-time supports for students who might otherwise languish on the brink of failing," she writes.

"This requires more than simply churning struggling students through end-of-course 'catch up' or making them take the same test over and over until they pass. Instead, classrooms must be fundamentally redesigned to fill gaps in understanding in real time and allow students to move at a flexible pace that accords with their understanding."

Failure is a part of life, but failure should be an opportunity for further learning and improvement. Our schools need flexible systems that allow students to move at their own pace with supports in place to help them when they are struggling.

As educators we must accept failure as an opportunity for growth. This is what will truly prepare our children to be successful in their future college and career lives.