Researchers show the danger of dormant viruses in the body 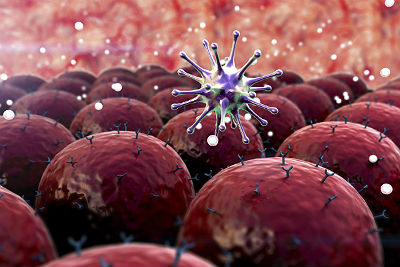 Sepsis is caused by many different types of microbes, including bacteria, fungi and viruses. This is a major challenge in the intensive care unit of hospitals, where it is one of the leading causes of death.

Sepsis arises unpredictably and can progress rapidly. Every year, severe sepsis strikes about 750,000 Americans. It's been estimated that between 28 percent and 50 percent of these people die — far more than the number of deaths in the United States from prostate cancer, breast cancer and AIDS combined.

Now, a provocative new study links prolonged episodes of sepsis to the reactivation of otherwise dormant viruses in the body. In healthy people, such latent viruses are kept in check by the immune system.

However, a study by a team at Washington University School of Medicine in St. Louis shows strong evidence that when sepsis lingers for more than a few days, viruses re-emerge and enter the bloodstream. This signals that the immune system has become suppressed, and leaves patients unable to fight off secondary infections.

In the current study, researchers used polymerase chain reaction (PCR) testing to detect a range of viruses in blood and urine samples from 560 critically-ill patients with sepsis at Barnes-Jewish Hospital. As a comparison, they performed the same test on 161 critically-ill patients in the same hospital who did not have sepsis, and 164 healthy patients who were having outpatient surgery.

What the researchers were specifically looking for were viruses that people are commonly exposed to early in life that persist in the body in a latent form that doesn't cause sickness — something no one had really look at before. These viruses, the researchers believed, had the potential to reactivate if the immune system became suppressed.

The results showed that patients with lingering sepsis had markedly higher levels of viruses detectable in the blood compared with the healthy controls and critically-ill patients without sepsis. Among the sepsis patients, the researchers found that 53 percent had Epstein-Barr virus, 24 percent had cytomegalovirus, 14 percent had herpes-simplex virus, and 10 percent had human herpes simplex virus-7.

Although these viruses don't normally lead to significant illness in those who are healthy, the viruses can cause problems in patients who are immune-suppressed. The researchers noted that 43 percent of patients with sepsis had two or more viruses detected in their blood or urine during their hospital stays.

They also noted that septic patients with higher levels of viruses detected in their blood were more likely than critically-ill patients without sepsis to have more severe illnesses, secondary fungal and bacterial infections, and longer stays in the intensive care unit.

The researchers stumbled on more viruses than they had anticipated and hope that their findings will stimulate further studies that may ultimately open the door to new, more successful ways of treating sepsis than present treatments.