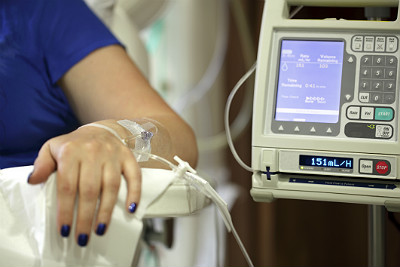 Gastric cancer (GC) is the fourth-most common cancer in the world, but there has been a continuous fall in its incidence and mortality rates in developed countries in the past 50 years. This has been mainly due to dietary improvements and a decrease in chronic Helicobacter pylori infection.

Yet the outcome in many Western countries remains poor with an overall five-year survival of 25 percent as compared to 70 percent in Japan. This could be due to an earlier diagnosis in Japan. The transition from normal gastric tissue into carcinoma could take up to 20 years. However, most GC cases have been diagnosed in advanced stages since it is asymptomatic at early stages.

Guidelines recommend gastroscopy only for symptomatic patients or the ones with GC family history. There are five major types of GC defined by the World Health Organization (WHO), including tubular, papillary and mucinous adenocarcinoma along with poorly cohesive and mixed carcinoma.

Chronic atrophic gastritis has been reported to be associated with H. pylori infection. Depending on the strain virulence and host susceptibility, there is some degree of risk to develop GC. Almost 90 percent of GC is sporadic and 10 percent familial.

This could be suggestive of a role for epigenetic agents in the treatment of GC.

At the moment, when there is no symptom, chemotherapy without resection has been the standard of care. Surgery is the treatment of choice for GC patients with early disease. However, a more extensive lymph node dissection along with a longer-term follow-up could increase the sure rate even higher.

The primary staging strategies include: endoscopic ultrasound and computed tomography of the chest and abdomen. Furthermore, laparoscopy is used to exclude small-volume peritoneal GC metastasis. The accuracy of the stage determination using these techniques has been reported to be 60-80 percent [3].

In stage II of GC, surgery alone might be effective. However, it has been reported that patients might benefit from preoperational neoadjuvant chemotherapy. This could reduce tumor size and burden prior to surgery and can improve the five-year survival (from 23 percent to 36 percent). Therefore, this approach has been adopted as the standard for care in many European countries.

A combination of epirubicin, cisplatin and 5-flurorouracil (5-FU) (ECF) has been often used for this purpose. However, many centers have now substituted 5-FU with capecitabive (ECX) because of its capability of being administered without a need for central-line access and having the same efficiency as 5-FU. In general, five classes of cytotoxic agents are being currently used in GC treatment, including: fluoropyrimidines, platinums, taxanes, topoisomerase inhibitors and anthracyclines.

These agents can be applied in singlet, doublet and triplet chemotherapy options, where doublets are superior to monotherapy. However, there is still an unmet need to be addressed that justifies new research for potential future new cellular drug targets for GC treatment.

Personalized therapy with targeted agents could be perhaps the way due to GC molecular diversity. There has been only one approved targeted agent for GC so far: trastuzumab. However, a number of potential targets are being studied, including: EGFR, HER3, vascular endothelial growth factor (VEGF), PI3K/mTOR, FGFR2 and MET.

Furthermore, a number of anti-VEGF-directed drugs are being studied for GC. One example under investigation with promising phase II and III results, could be the monoclonal antibody bevacizumab that is an anti-VEGFR-2 monoclonal antibody, ramucirumab.

On the other hand, there has been interest in PI3K/mTOR pathway, since it is well-known to be disregulated in 50-60 percent of the tumors. The motor inhibitor, everolimus, has shown promising results in preclinical and early clinical trials.

Different strategies have also been examined including: combining chemotherapy with anti-angiogenic drugs, and combining chemotherapy with targeted therapy. There are several approaches that can potentially speed up the networks for patient screening of rare mutations or alterations in GC, adoption of novel study endpoints, including emerging techniques such as metabolic imaging and fluorodeoxyglucose-positron emission tomography (FDG-PET), in the treatment to detect early response.

In the end, it is an art that needs to be practiced by the surgical oncologist to find balance in the surgical aggressiveness in relation to survival while maximizing quality of life.