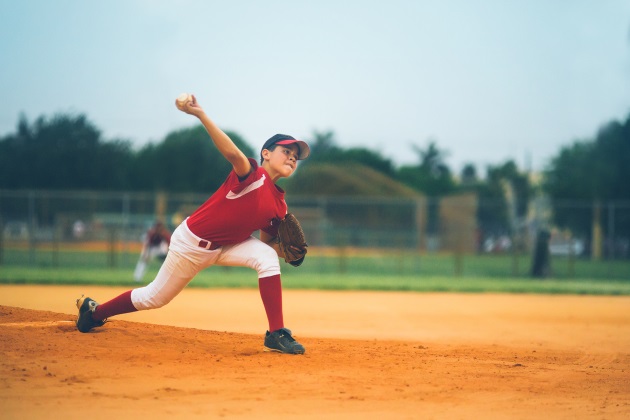 Three out of five players on the April 30 MLB injury list were out due to arm injuries, the majority in the elbow and shoulder. Furthermore, pitchers accounted for 58.59 percent, or $420 million of the salary on the disabled list in 2015, as reported in a Forbes article.

Elbow injuries led at 21 percent and shoulder injuries followed at 17 percent. For young players, injury statistics can match or even surpass those of the major leagues.

Consider a well-publicized report from 2015 showing that players between 15 and 19 years of age accounted for close to 57 percent of the total number of ulnar collateral ligament reconstruction procedures (UCLR) or Tommy John surgeries covered by private-payer insurance between 2007 and 2011.

In the major leagues, lost playing time is costly to the league and can affect a player’s career. The ramifications for young players may not include such a shocking price tag but are equally serious.

An injury may mean a sudden loss of identity at the precise moment that the physical outlet for processing strong emotions is stripped away. Some see their dreams for the future dashed, and nothing anyone says can convince them otherwise.

Given the potential emotional and physical consequences of a serious injury, there’s no place where parent-coach complicity is more important than in prevention. When faced with an adolescent player’s impatience or reckless ambition, the unified parent-coach team can work together to educate the player that injury prevention is in his/her best interest long-term.

Unfortunately, avoiding injuries isn’t necessarily clear cut. Researchers over the past decade have sought to pinpoint the primary source or sources of baseball arm injuries.

The findings showed no significant difference in exercise programs, stretching practices, relieving frequency, pitch type frequency or the age at which pitch types were first thrown, yet they did show that the injured group had more starting pitchers, threw at higher velocities and often played with arm pain and fatigue.

That same year, pitch restrictions were revised from the initial recommendations set for youth baseball 10 years prior in 1996. While most people in the field, such as coaches and sports medicine professionals, agree that limiting pitches is helpful for young players who are still growing and developing, the occurrence of arm injuries while playing for this demographic is still on the rise in 2018.

One issue is that while published pitch counts are likely to reduce cases of injury, surveys show that not all coaches, parents and players adhere to these guidelines. Researchers from the Rady Children’s Hospital in San Diego held that exact hypothesis that injury would be due to non-compliance when they embarked on a study to find out whether adhering to recommended pitch counts is enough for children to avoid injury.

Their research involved comparing pre- and postseason examinations of 26 Little League players aged 10-13 years old with the use of magnetic resonance imaging (MRI) to detect abnormalities the players’ elbows.

All the players complied with the Little League pitch count limits, nonetheless, at the end of the 12-week season, 48 percent had MRIs with abnormalities. Three-fourths of these showed new damage or a worsened abnormality, the majority occurring on the medial side of the elbow.

So if players are staying within the limits but still getting hurt, what is going wrong? One point brought up by Jason Zaremski, assistant professor of medicine at the University of Florida, is that regulating pitches in a game does not accurately reflect what a player is throwing because it fails to register pitches thrown during before-inning warm-ups and in the bullpen.

"Players may therefore be considered in the 'safe' zone of pitches thrown when compared to state guidelines — when in reality, the pitching volume and unaccounted workload including the bullpen and before-inning warm-up pitches would be significantly higher than recommended," explains Zaremski.

His team at the University of Florida is currently conducting research on this unaccounted workload factor. Although final results hadn’t been released at the time of his article, there was already observational evidence that players with 70-80 registered game pitches may actually throw 120-130 overall.

He doesn’t believe that this means bullpen practice should be regulated. On the contrary, players should have the freedom to warm-up in the unique way that suits them. However, it suggests one possible reason why young pitchers who adhere to pitch restrictions are still getting hurt.

The research points to other potential injury factors. It showed that while the study participants complied with pitch limits, the majority didn’t follow non-mandatory Little League recommendations like avoiding year-round play, not to throw off-speed pitches like curveballs/sliders, and to avoid playing on multiple teams during the same season.

At least one of these three guidelines was violated by 88 percent of the players with a new or worsened postseason MRI abnormality, compared with 65 percent of players with no new/worsened condition.

Retired pitcher Tommy John, who now tours the country to educate players and parents about the proper development of pitchers and injury prevention, rails against specialization and young children throwing year-round in travel baseball teams to improve their chances of getting a college baseball scholarship or drafted.

While debate remains on issues such as pitch counts, sports medicine professionals and many coaches agree with what several research studies have shown — year-round baseball and sports specialization increase injury potential for young players.

“Let your kid be a kid. Let them have fun. Your arm can only take so much, even if you're an accomplished pitcher,'' John urged parents while speaking to Syracuse.com