Ready to take the leap to being vegan? 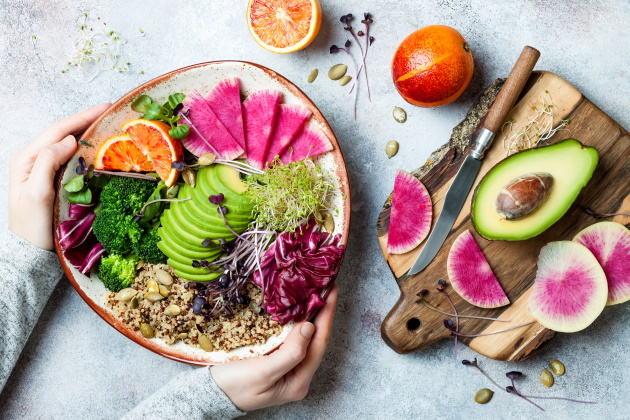 I became a vegetarian when I was 15. I was inspired by a couple of classmates in high school who shared with me all the reasons they’d given up eating meat — not killing animals, better for the planet, healthier, etc. I decided to join them.

This was in the mid-1970s, decades before Whole Foods came on the scene, making it easier to eat foods that were different from mainstream America. Most "health food stores" at that time were tiny little hole-in-the-wall stores that focused on supplements and not much food. Not very inspiring to a teenager.

I had to work hard to find food I could eat and lived mostly on veggie elbows and cheese. I stuck with it for eight years, and only gave it up because I was tired of the limitations and always having to accommodate a different way of eating.

It wasn’t until many years later in 2012, when I decided to participate in a national challenge to do a 10-day raw cleanse, that I decided again to make a radical dietary shift. I had recently purchased a Vitamix blender, so I was ready to jump in with both feet. The challenge was a great jolt to my system and though I didn’t follow the raw foods diet when the challenge ended, it got me to give up gluten, dairy and meat, essentially becoming a gluten-free vegan. I was pretty strict with it for almost three years until 2015 when I drifted back into eating dairy, chicken and eggs again.

Now, five years later, I’m again moving back into a mostly plant-based diet. Why? It simply makes the most sense for my health, the health of the planet and the well-being of animals.

Though the number of vegans in the U.S. isn’t large — only 3% of people in the United States — the vegan and vegetarian market is expected to be worth $5 billion this year. Obviously, something is changing. I suspect this is due to the increased awareness of the many benefits of not eating meat, eggs, dairy and any food that contains them (some vegans include honey in that list). If you’re thinking about becoming vegan, here are some things to consider:

Benefits of Being Vegan

Nutritional: From a health viewpoint, there is a lot of research showing that eating a plant-based, vegan diet reduces the risk of diabetes and cancer, is better for the heart and helps with weight loss.

Environmental: From the amount of water, land and crops used to sustain animals used for meat production to the amount of methane gas released into the environment by cows and sheep, pollution of rivers and streams, destruction of topsoil and wildlife habitats, etc. required by a meat-based diet, eating vegan makes sense for the environment.

Animal Welfare: According to PETA, every vegan saves 200 animals per year.

Challenges to Being Vegan

Nutritional: Specific nutrients that are typically found in meat and dairy products, including iron, protein, calcium, vitamin B-12, and vitamin D must be carefully integrated into a vegan diet with specific foods and supplements to make sure one doesn’t become deficient.

Social: It can be challenging eating dinner out with friends and family who aren’t vegan or being a guest at someone’s house who is not vegan. This requires planning ahead, and on occasion, bringing along your own food to supplement or replace what is being offered by a restaurant or host. There are raw and vegan restaurants as well as vegan-friendly menus that can be found in more populated areas.

Variety: If you grew up with a traditional meat and potatoes diet, it might be daunting to come up with creative alternatives to your favorite foods. Fortunately, there are lots of meat substitutes out there that actually taste like meat, alternative non-dairy drinks and cheeses, vegan pizzas and so on.

In addition, many recipes have been modified by vegan chefs to provide alternative ways to enjoy familiar foods. They can easily be found with a Google search.

What you eat is a personal choice, though many vegans would argue that a vegan diet has now become a global necessity because the health of our planet and the well-being of the living creatures surrounding us depends on it to survive. Buddhist monk and peace activist, Thích Nhất Hạnh sums it up this way: “By eating meat we share the responsibility of climate change, the destruction of our forests, and the poisoning of our air and water. The simple act of becoming a vegetarian will make a difference in the health of our planet.”