Raise a glass of beer — to your health 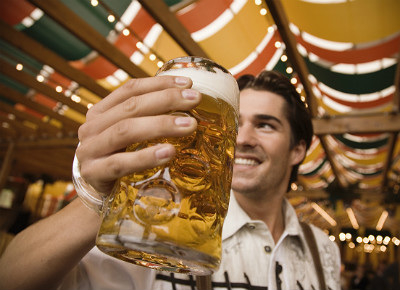 Despite the name, Oktoberfest traditional fall beer celebrations begin in September and extend into October. The biggest Oktoberfest beer bash is held in Munich and is considered to be the world's largest fair. This year — the 180th year the Oktoberfest has been held — will host more than 6 million people from around the world.

The first festival was actually an enormous wedding reception in 1810 for Prince Ludwig of Bavaria as he celebrated his marriage to Princess Therese by inviting the entire city of Munich. It is estimated that 40,000 townspeople showed up to toast the couple with large quantities of beer. Today’s Oktoberfest celebrants can not only toast to good food and fun, but also good health.

"A cold beer is the perfect way to relax at the end of the day, it tastes great, and in moderation, it can even be good for you," says Ethan A. Bergman, Ph.D., RD, CD, FADA, President of the Academy of Nutrition and Dietetics.

Another meta-analysis study that also included beer, found that light to moderate consumption of alcohol was related to a reduced risk of multiple cardiovascular issues with the lowest risk for coronary heart disease mortality being among those who drank one to two alcoholic beverages a day. Reductions for stroke mortality was associated with those drinking, but drinking less than one a day. The analysis showed that the overall mortality was lower for drinkers than nondrinkers.

There have also been animal studies investigating beer in isolation. A study of mice found that moderate ingestion of beer reduced liver triglycerides and aortic cholesterol deposit in the mice under study. And pigs consuming beer were found to have reductions in risk of disease and death from coronary artery disease. Moderate beer consumption is not only associated with decreased incidence of cardiovascular disease but also diabetes, and certain types of cancer, including colon, basal cell, ovarian and prostate carcinoma.

Beer has benefits that other alcoholic beverages do not. It contains silicon, and this nutrient is important in the treatment of postmenopausal osteoporosis. Increased intake of bioavailable silicon has been associated with increased bone mineral density. Other foods containing silicon include whole grains, cereals and green beans. For men, beer was found to lower the incidence of kidney stones when compared to other alcoholic beverages. The compounds in hops may be slowing the release of calcium from the bones, and this calcium is a factor in kidney stones.

Beer contains more of many micronutrients than other alcoholic beverages such as red wine. A 12-ounce bottle or can of beer has more folate, vitamin B6, niacin, pantothenic acid, riboflavin and vitamin B12. Red wine and beer are similar in the amounts of potassium, magnesium, phosphorus and fluoride. But beer has more selenium and silicon than red wine.

If your fall travels include one of the many Oktoberfests throughout the United States or travel to Munich, tip a cold one and enjoy good health. But everything in moderation, of course.