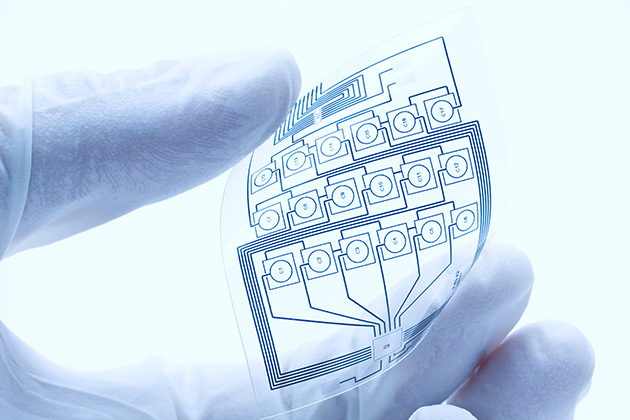 Advances in printed electronics are facilitating innovative developments, such as flexible and rolling screens for different applications, including e-readers, smartphones, lighting solutions to be adapted to complex surfaces and electronic devices to be adapted to the human body. This new technological advance will allow a new technological leap in consumer electronics and human-machine interaction in the coming years.

These are examples of the numerous developments in organic electronics, which will be able to be printed partially or totally in the coming years.

A recent report by Smithers Pira called "The Future of Functional and Industrial Print to 2020," identifies printed electronics as one of the key industrial sectors, where printing technologies are being used to produce screens, lighting, PV and sensors, among other applications. The use of 3-D printing technologies for the development of electronic components, RFID antennas, sensors and printed circuits is already a successful business for many suppliers, whose applications are creating new business opportunities.

The report establishes the forecasts of a fast growth during the coming years for this new sector, for what a growth forecast of $67 billion in 2015 to more than $108 billion in 2020 is made. 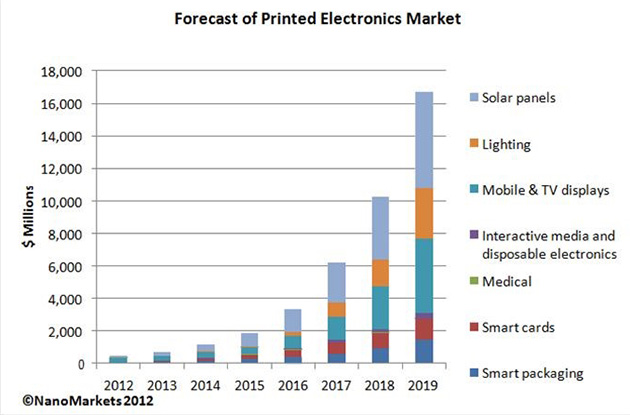 On the other hand, the development of portable wireless technologies and the democratization of smartphones have set a new era for portable electronics, which is still in an early stage. Wearable devices were once used only in industrial environments, but they are now being well received among consumers. These devices aim to improve quality of life through different applications, such as health monitoring, sports and fitness, among others. 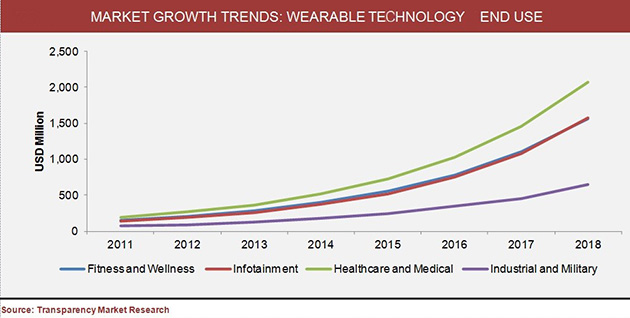 
Competition is strong, and there are many different available products: smart watches, smart glasses, bracelets and accessories, independent or combined with a smartphone or tablet. The space for innovation seems to be infinite.

In this regard, watches are the most common form of portable electronics used by consumers. They not only show the hour, the calendar or the altitude, but they also now feature heart rate and pulse monitoring and offer health analysis to users. They can also make and receive calls and messages, which shows a great potential for portable electronics in the market. 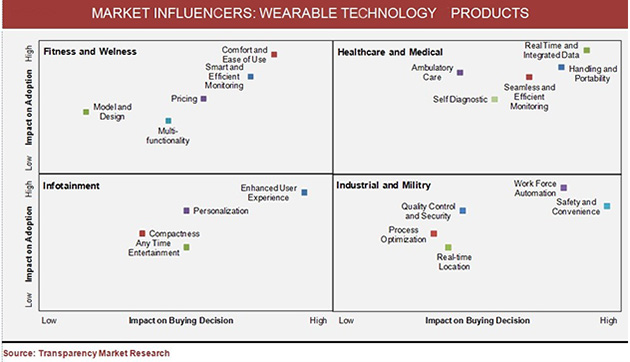 
The evolution of wearables

The idea of miniaturization and portability has been traditionally one of the main targets of any device. The rise of microelectronics in the '70s and '80s involved an important boost for this endless pursuit: increasingly smaller things.

There is also a basic triangle centered around this eagerness: size, aesthetics and functionality.

The size, which is becoming smaller and more integrated in human anatomy, is critical. Aesthetics, since fashion prints its mark, provides distinctive and social character. And functionality is critical, because advanced and innovative utilities and applications are sought, beyond the classical, visionary and mythical Casio electronic wristwatch, which is once again fashionable.

From informing only about the hour, watches have evolved to enhance the integration and new applications and functionalities, such as integrated radios and televisions, the extension of communications at the highest level, tracking devices, welfare monitoring systems, security control and many more.

The history of devices has its origin in the Qing dynasty of China in the 17th century, when an abacus was miniaturized to be included in a ring for traders. Then, in 1762, came the first marine chronometer with analogic watch integrated, and in 1987 came the first deaf-aid. Currently, we have examples like Google Glass and Apple Watch. 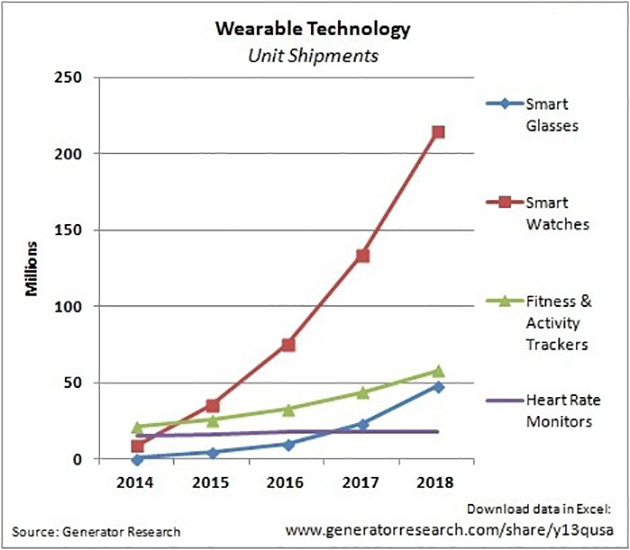 
We cannot ignore the fact that these devices have a playful component, but if we have to highlight two market niches that are really sensible to the development of these systems, there is no doubt that sports and biomedical applications are the most demanded.

The monitoring of the personal physical status during exercise efforts and sporting events is a great attraction for today's consumers. In fact, more than 70 percent of the current wearable devices are related to the registration and monitoring of vital signs.

Therefore, the commitment to the field of consumer electronics by big, international companies has become apparent during the last few years. Well-known trademarks, such as Apple, Google, Fitbit, Garmin, Polar and others, have a monopoly over wearables.

There is an ongoing race for the most accurate, singular and special measurements we can imagine — control of other devices, security systems to prevent crisis in chronic patients, monitoring general health variables (cholesterol and glucose levels) and even smart systems to detect infections and act accordingly.

However, this technology race faces the critical barrier of these devices' independence, from aspects related to energy consumption to the need for data interpretation. In this sense, 56 percent of the current wearables depend on other devices — smartphones, personal computers, etc. — to control or manage their functions and measurements.

The next generation of wearables

Printed and flexible electronics are allowing the development of devices and electronic components that can be integrated directly onto the skin. New high-conductivity inks can be printed on elastic materials in high resolution, without losing their functionality.

Looking ahead, even intracorporal wearables are seen as key elements in the future of medicine. Portable sensors — such as the BioStamp sensor developed by startup MC10 — will integrate these devices more fully to our body.

However, many scientists are taking a close look at the development of sensor nets integrated in the body to monitor and prevent certain attacks and diseases. For instance, Harrison Hall, a Ph.D. student at the University of Dartmouth, is working on a corporal sensor net to detect and measure epileptic seizures.

In the coming years, portable health sensors are going to grow in terms of capacities and will be probably integrated in our daily life.

Adolfo Benedito has a Ph.D. in chemistry from the University of Valencia, focusing on ABS copolymer degradation and recycling capabilities. Since 2001, he has been working at AIMPLAS as head of the compounding department until 2009, and currently as head of materials research department. Adolfo has been the main technical responsible for several EU research and national projects, as well as author and co-author of several papers and book chapters focused on nanotechnology applied to polymeric materials.