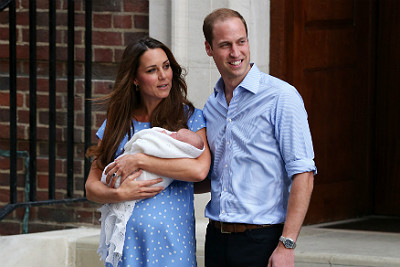 Prince William and Kate Middleton leave the hospital with their newborn son George on July 23, 2013.

It's been a year since Britain's Prince William walked away from the cockpit, piloting search-and-rescue (SAR) missions in Sikorsky Sea King helicopters for the Royal Air Force (RAF). Now, after experiencing fatherhood and a year of global "grip and grin" goodwill tours on behalf of the monarchy, William has decided he is not quite ready for the life of a full-time figurehead in the fish bowl.

Last month, his minions "let slip" that the prince is itching to get back in the cockpit.

It's easy to see why. Beyond the fact that the paparazzi can't follow him in the air (at least not yet), flying in and of itself is addictive, and SAR missions add the adrenaline rush of life-and-death equations. It's heady stuff for a young man.

William's RAF domestic SAR mission has been privatized, so he is considering obtaining a commercial pilot's license and flying air ambulances as a civilian for a private-sector entity — perhaps the East Anglian service that operates a pair of medevac-outfitted Airbus EC135T2 helicopters.

It's a noble idea as well as a potentially fatal one.

In general, flying skills are perishable but even more so with helicopters. As Transport Canada pointed out in a safety letter last year:

"Unfortunately, they (accidents) are more likely to occur and with more severe consequences if the pilot has relatively low experience, limited training or lapsed currency. Flying a light helicopter requires numerous skills that degrade unless structured training and emergency procedures are practiced on a regular basis. These skills are perishable and degrade more quickly in helicopters because of the number and complexity of helicopter-specific emergencies that can occur and escalate in flight."

In the RAF, William was teamed with a co-pilot on each mission — one, I suspect, who had the experience to counsel the prince should he find himself confronted with "a sticky wicket." The EC135 is considerably smaller than a Sea King and is flown single-pilot by East Anglian. If this practice is continued with a royal aboard, we would find out quickly if William has "the right stuff."

Then there is the matter of a schedule that could be a shock to the royal system. East Anglian pilots fly five days on, three days off, a far cry from William's special reported military schedule of eight days on a month.

Flying medevac is serious business. It is a discipline requiring frequent repetition. It is not a hobby and is ill-suited for rusty part-timers looking to have a little fun. The nonprofit East Anglian would no doubt welcome the Prince as a boon to fundraising — right until he buries the rotor blades into a bucolic British cottage.

Not all itches should be scratched.