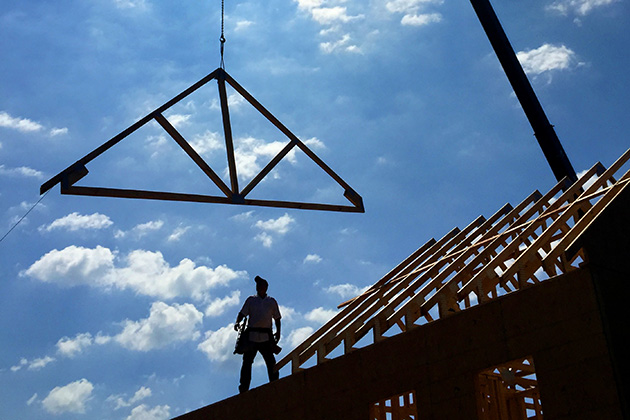 Short supply of available inventory pushed down sales and drove up prices of existing homes in June. Although demand remains high, would-be buyers are struggling to find suitable homes at a price they can afford.

By the same token, the shortage of existing homes for sale helped to boost new-home construction last month. Builders, though, being hit by increasing costs, worry that their properties may soon be priced out of reach for many potential buyers.

Having rebounded in May from a substantial drop in April, sales of existing homes declined in June for the third time this year, slipping 1.8 percent from May, largely due to "meager inventory," according to the National Association of Realtors. Sales of existing single-family homes fell 2 percent.

Prices, meanwhile, climbed 6.5 percent for the month — hitting a new peak — with prices of single-family homes up 6.6 percent. To date, sales are up from the same time last year, but by less than 1 percent. The decline was not unexpected, as pending home sales in May tumbled for the third month in a row, by just under 1 percent, below 1.7 percent from May 2016.

Sales of new homes nosed up 0.8 percent in June — with demand highest in the West where existing inventories are tightest — and are up 9.1 percent from a year ago. New home sales, too, have underperformed due to rising prices and insufficient inventories.

Sales for the previous three months were revised downward, and June sales fell below analysts' expectations. Although the median price of a new home declined by nearly 3.5 percent in June to $310,800, that is still well above the now-peak median existing-home price of $263,800, and well out of reach of most first-time buyers.

With total inventories of existing housing for sale at less than 2 million properties — 7.1 percent under what they were a year ago — pressure is on builders to produce more to meet rising demand. Housing starts (in units) rose 8.3 percent in June and were up 2.1 percent from a year ago. Single-family starts increased 6.3 percent over May. Permit requests also jumped 7.4 percent for the month (single-family requests rising 4.1 percent) and were 5.1 percent higher than the same time last year.

Dodge Data & Analytics reports that residential construction (in dollar volume) fell 4 percent in June, with single-family construction down 4 percent for the month but up 8 percent over 2016 due to a strong start in January and February. The drop may be a reflection of fewer requests for permits in April and May.

Even with renewed activity in June, builder optimism has eroded in recent months as business conditions have worsened. The National Association of Home Builders announced builder confidence in the market for newly-built homes in July slid for the second month in a row, slipping two points from June's figure, which was revised downward.

Increasing supply-side costs for frame lumber and other materials as well as labor have builders concerned about the price-competitiveness of newly-built homes in the months ahead. They have scaled back somewhat their expectations for growth in the second half of the year, citing softening current sales and buyer traffic.

The NAHB also stated that a record percentage of builders report low to very low supply of developed lots in their areas, which, in turn, will lead to higher prices. As yet, builders have not received the regulatory relief they hoped for under the Trump administration that could help offset rising costs.

At present, demand for housing remains strong, and consumers continue to be optimistic about the economy — although not as optimistic as they were at the beginning of the year.

Signs that consumers have some concern about their future personal financial situation have emerged of late. Fannie Mae's Home Purchase Sentiment Index survey for June found a slight decline in the percentage of respondents who are not concerned about losing their jobs or who report their income is significantly higher than it was 12 months ago.

Preliminary results of the University of Michigan's Survey of Consumers for July show a drop of 2 points in consumer sentiment and a decline of 4.4 points in confidence concerning their future economic prospects from June, as the forecast for economic growth has been revised downward following results from the second quarter. In the face of rising prices, this could have a dampening affect on home sales going forward.