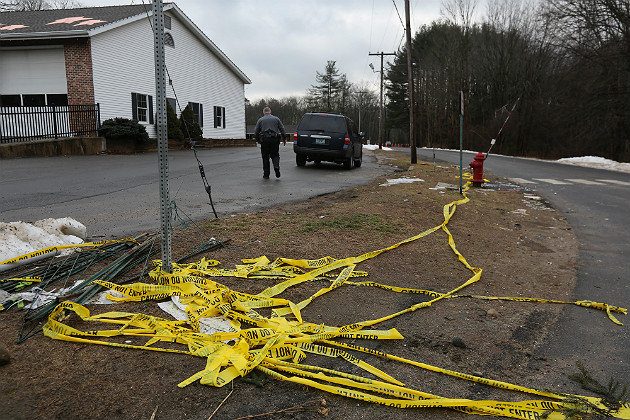 Police tape lies near the road to Sandy Hook Elementary School in Newtown, Conn., where 26 people were killed Dec. 14, 2012.

Gun violence is a major social issue in America, and schools and university campuses have become targets of this gun violence.

In recent years, dozens of students, faculty and staff have become victims of this gun violence while on campus, and the loss of life and serious injuries have been devastating to our communities. Citizens are demanding that federal and local government take immediate action to make our educational campuses safe.

In response to recent campus violence, an idea to have schools adopt an armed security force to patrol campus grounds and buildings has been proposed to lawmakers, law enforcement and educational governing boards. This proposal has been controversial, and as the debate continues on how best to secure U.S. educational campuses, campuses remain vulnerable to future acts of gun violence.

This article will evaluate this proposal and analyze the evidence to determine the benefits or concerns of armed security forces as one possible solution of defending campuses against future gun violence.

In the wake of recent school shootings, the National Rifle Association (NRA) made a proposal aimed at protecting school campuses across the United States from future acts of gun violence on campus. The NRA's proposal is The National School Shield plan. This comprehensive campus safety plan also called for the creation of armed security forces made up of volunteers and paid, trained security professionals to patrol the school campus to deter future gun violence.

Since the Colorado shooting at Columbine High School in 1999, U.S. law enforcement has changed tactics when responding to an active shooter on school campuses. Law enforcement officers are trained to form small tactical entry teams from the first responders arriving on scene, enter onto the campus and buildings, and confront the active shooter using deadly force if necessary to stop the armed suspect from harming additional innocent victims.

According to the NRA, The National School Shield plan was a direct response from citizens to secure American campuses from gun violence. The NRA has made this proposal so that there is an armed security force presence on campus to deter gun violence from occurring as well as an immediate trained armed response to take action if gun violence starts on the campus.

According to recent research in the American Journal of Criminal Justice, there are just as many citizens opposed to placing armed security officers on campuses for a variety of reasons. The study indicates that the disadvantages far outweigh any benefits to armed security.

Besides the estimated cost of $4 billion to $6 billion to hire, train and arm a campus security force for every educational campus, there is an increased potential for accidents to occur when there are armed security patrolling. The authors argue that with armed security on campuses, there will be an increase in public perception of a false sense of security, potential of increased fear among students and the negative impact of school climate leading to increased dropout and lower graduation rates.

According to the authors, the most obvious safety flaw in The National School Shield plan is the fact that the presence of armed campus security means the presence of firearms already on campus and the potential for accidents occurring or an escalation of violence once an incident starts. They stated that the more firearms that are on campus, the greater the likelihood that they could fall into the wrong hands and then be used on campus. The liability is greater than the possible benefits.

Preventing school gun violence is a social issue that affects the safety and health of our citizens and local communities. As we have witnessed over the past several years, gun violence can occur on college campuses, high school campuses and elementary school campuses.

No campus is immune from becoming the next target of an angry person using a firearm to destroy lives on American campuses. It is our social duty as citizens to help develop proactive preventive strategies before violence occurs. We cannot wait or look for answers from our local, state or federal government to solve the issue. We have a stake in our educational institution’s safety as responsible citizens.

America's first responders have become experts at responding to mass school shootings after the incident. Law enforcement can secure a crime scene and make it safe, medical units have experience providing emergency medical care and evacuation injured, and our hospitals can accept large numbers of casualties without a lot of notice and provide life-saving care.

We know we can respond to man-made disasters because we have trained and well-equipped emergency first responders. However, we can be proactive with school gun violence with a comprehensive security plan.

Is it a good idea to have armed security at schools?