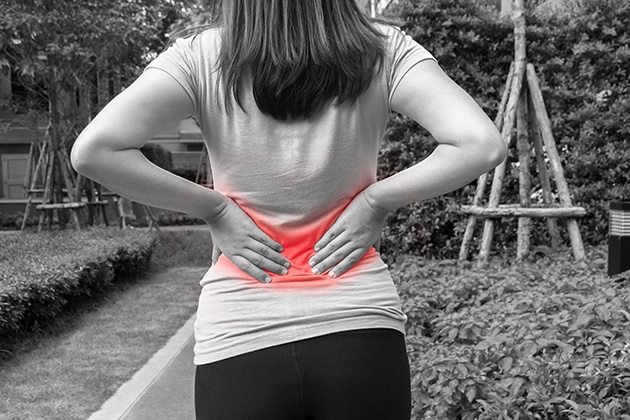 According to data from the 2012 National Health Interview Survey, within a previous three-month period, 25 million adults in the U.S. had daily chronic pain, and 23 million more reported severe pain. Of those in pain, 27% suffer from lower back pain, 15% from severe headache or migraine pain, and 15% from neck pain.

Neuropathic pain persists after the initial injury has healed. The condition is notoriously resistant to treatment, with a prevalence of 7 to 10% in the general population.

When pain is chronic, signaling persists over time and can lead to biochemical changes in the nervous system. Options for treating chronic pain include oral (nonsteroidal anti-inflammatory drugs, acetaminophen, opioids) and topical therapies (ointment, cream, or patch applied to skin).

Other options include physical therapy, exercise, acupuncture, relaxation techniques, and psychological counseling. In a 2006 survey, more than half of chronic pain sufferers felt they had little or no control over their pain.

Effective drugs against chronic pain are not necessarily forthcoming. However, researchers have recently identified a protein as a future potential target for medicinal drugs.

Assistant professor Mette Richner is employed at the Department of Biomedicine and the DANDRITE research center of Aarhus University in Denmark. Richner, who began on the project as a Ph.D. student in professor Anders Nykjaer's group, subsequently completed the project as a postdoc in associate professor's Christian B. Vaegter's research group.

According to Richner, once nerve damage has occurred, and the nerve cells go into overdrive, molecules are released, which start a domino effect that ultimately triggers pain. The domino effect can be inhibited by a molecule in the spinal cord called neurotensin, and her studies show that the neurotensin is captured by sortilin, so that the brake is itself inhibited. The protein sortilin is expressed on the surface of nerve cells and plays a role in pain development in laboratory mice.

Studying the pain-related puzzle in relation to the spinal cord arose from decades of research in both pain and sortilin. The initial studies involved mice that lacked the ability to form sortilin and were pain free despite nerve damage.

The researchers determined that normal mice also did not develop pain after nerve damage when the researchers blocked sortilin, ultimately explained by the regulation of the pain-inhibiting molecule neurotensin.They hope that investigations will continue to investigate whether it is possible to block sortilin locally in the spinal cord, so that the neurotensin can move freely and get the brake to function, thereby inhibiting the pain.

Vaegter speculates that although the research has been carried out on mice, some of the fundamental mechanisms are similar in humans and mice, providing an explanation of what is happening in people suffering from chronic pain.