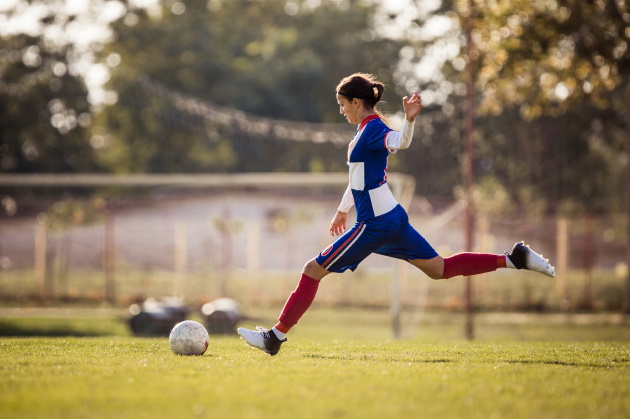 It's basketball and soccer season. Athletes have been training all throughout the spring and summer in preparation for the final months of 2019 and the first quarter of the 2020.

The goal for most athletes is to have a breakout season. In doing so, an athlete must stay healthy. While this is the season for basketball and soccer, this is also the season for bad knee injuries.

For female athletes, anterior cruciate ligament (ACL) injuries are among the most common. Often, those injuries happen in noncontact fashion. According to an article from Baylor College of Medicine, roughly 70% of ACL tears are noncontact injuries.

The ACL is one of the primary ligaments that assists with the stabilization of your knee joint. Changing direction, making lateral cuts, pivoting, and landing from jumping are why ACLs are so important.

"Female soccer players are one of the highest risk groups among athletes for ACL tears," said Dr. Theodore Shybut, associate professor in the Joseph Barnhart Department of Orthopedic Surgery at Baylor. "In fact, studies have reported that female athletes are two to 10 times more likely to have ACL tears compared to male athletes."

So why are ACL tears more common in female athletes? According to Johns Hopkins Medicine, female joints "generally have more looseness and range of motion" than male joints. To add, there's less muscle mass around the knees of young female athletes, which could lead to instability — and an injury if a ligament is overstretched.

What exactly can be done to prevent ACL tears? That's a tough question to answer, as these injuries can be unexpected and caused by the slightest irregular movement. But here are a few things that can be done the help prevent tears and other major injuries to the knee.

Make warmups a priority: You never want to start playing cold. It is mandatory to stretch and get your blood circulating. Make sure your joints and muscles are warm — before games and practices.

Develop muscles evenly: When working out, the one thing you don't want to do is focus on one primary area. Make sure you're training your body evenly, top to bottom. Don't ignore an area.

Use proper technique: As you train, proper technique is everything. Whether it's strength training or cardiovascular training, proper form can be the difference in an outstanding showing on the court or the field and a season cut short because of a bad injury.

The right diet counts: Did you know that improper nutrition can lead to a dip in endurance? Eating the right foods can result in performance improvement and focus enhancement.

Get enough rest: Playing to win, to some, means getting as much work in as possible — and then getting additional work in. Your body needs time to recuperate. Make sure you're getting enough sleep and alternating rigorous workouts with easier ones.

The last thing you want is to be sidelined with an ACL injury. Make sure you take these injury prevention tips seriously … and enjoy the season!