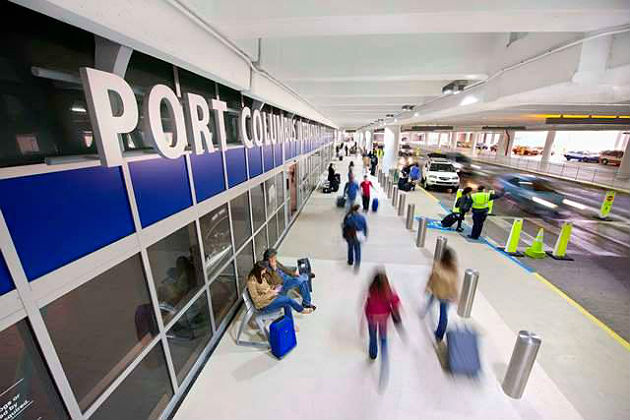 Port Columbus Airport in central Ohio has announced ambitious growth plans to help it stay ahead of the game when it comes to anticipated capacity problems in the next 15 years. The airport authority that runs Port Columbus expects to reach full capacity in its existing terminal, parking garages and road infrastructure by 2030 and is planning ahead to make sure it has the correct plan in place to ensure it can grow past this limit.

Of prime concern is the airport terminal, which has a capacity of around 8 million passengers per year. With the current rate of growth averaging at around 1.8 percent per year, this would limit the three-concourse facility by around 2030 to 2032.

In response to the growth needs, the Columbus Regional Airport Authority has devised a $1.3 billion plan to construct an entirely new 48-gate passenger terminal west of the current structure, along with a new 5,441-space parking garage and rental-car facility. Additionally, the plan calls for provision of a connection to the proposed light rail system that will bring easy transport between the terminal and downtown.

The existing terminal at Port Columbus, which dates mainly back to 1958, was expanded in both 1979 and 1998. It is currently undergoing a modernization program to improve facilities until its replacement is ready, with new lighting, restrooms, raised ceilings, security lanes and ticket lobby. This work is likely to finish in 2016, however, following the opening of the new terminal, this original structure would be demolished.

"This is part of our ongoing, long-range planning," said Elaine Roberts, CEO of the airport authority. "Originally, the thought was to operate two terminals, but it makes more sense to build one bigger one and open it all at once."

Funding for the work at Port Columbus will come from a variety of sources, including operating profits, passenger facility charges and concession charges. However, the Federal Aviation Authority will also be asked to fund it in part through grants and bonds. This will happen if the work is approved under their long-term plan for airport infrastructure across the country.

While the deadline for the work is still a good distance away, the airport authority is keeping a close eye on yearly figures, with Ohio expected to grow by 500,000 residents in the next few decades. If growth of this and of the airport's own passenger figures start to rise quicker than expected, the airport expansion work could begin sooner.

Susan Tomasky, authority chairwoman, said at a meeting to announce the plans that "a big part of being in the airport business is thinking ahead. It's never too early to be thinking about our long-term capacity."

An article in The Columbus Dispatch has criticized the announcements, making the case that Port Columbus Airport's growth rate does not warrant such an expensive and lavish new terminal when $80 million has just been spent on refurbishing the existing structure to a high standard. This is especially the case when the airport is still recovering from the loss of the base operated by America West Airlines, and even has mothballed gates that could be brought back into use.

However, with a 4.1 percent rise in passenger figures for the first three months of 2015 and a number of new services started in the past year, this rate could easily see the anticipated strain on facilities within the expected timescale.