New Porsche Macan set to muscle in on Range Rover 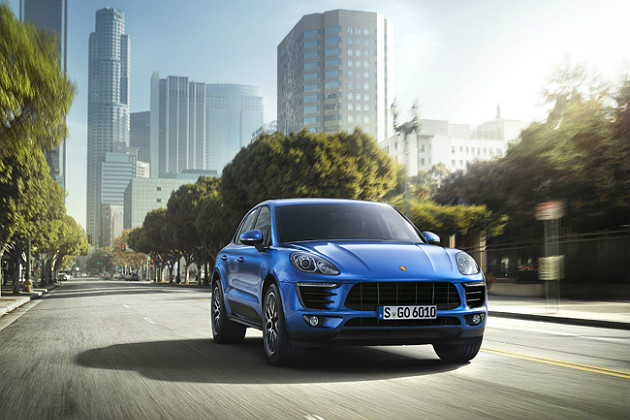 The new Porsche Macan is set to hit the U.S. market this spring, and the German automaker is hoping that the smaller category of the luxury SUV market will slot in nicely just below the larger and more costly Porsche Cayenne.

As you would expect, the front fascia on the Macan and much of its side profile appear similar to the existing Cayenne, albeit a scaled-down version. However, at the rear there's more of a resemblance to the 911, along with its single-piece bar taillight design. This is a slick touch indeed.

The Porsche Macan is based closely on its corporate cousin the Audi Q5, and it will share a number of the same mechanics and powertrain components. That said, the Macan will come with a turbocharged four-cylinder engine, and, potentially, a turbocharged version of the Q5's 3.2-liter V-6 will also make its way into the Macan.

This will inevitably add more power to the Macan in comparison to the Audi SUV's current 211 bhp and 270 bhp offerings. Speculations abound that the top-of-the-range V-6 will produce something in the region of 300-350 bhp.

It's also expected that the option for a diesel engine will be available to the European markets, although currently, it's not entirely clear whether Porsche will opt to bring this particular variant stateside. Having said that, the Cayenne Diesel is available in the States, so it cannot be entirely excluded from the realm of possibility.

All eyes are currently on exactly how Porsche will go about its marketing campaigns with respect to the Macan. The question is, will the priority be placed on the apex-clipping dynamics, or will the marketing be pushed more toward the off-road prowess?

With this being a Porsche, the chances are that the former set of attributes will take precedence. And in comparison to the Q5, the ride height will be lower, while the suspension will be tuned to offer sharper handling in addition to a firmer ride. As standard, all-wheel-drive will be fitted — or so it's predicted — particularly so when you consider that all Q5 versions which are sold in the U.S. are kitted with Audi's Quattro hardware.

A certain modicum of off-road credentials will likely be provided in the form of electronically programmable settings for driving on gravel, dirt and snow. However, there's little doubt that the Range Rover Evoque will still reign supreme in this market segment as the best mini-mudhandler.

In all probability, the base four-cylinder models will come with a six-speed manual transmission, while the more robust V-6 versions will likely be fitted with an eight-speed semiautomatic transmission.

To avoid any chance for cross-brand sales cannibalization, the pricing for the Macan will have to sit someplace north of the Q5, although certainly not much higher than the Q5 so as to avoid any overlap with versions of the entry-level Cayenne.

Joseph Archibald's love for cars began in his youth, as his father owned an old Porsche Targa. Joseph loved every minute of tinkering with the 911's air-cooled engine (as it was back then), or zipping along country roads at break-neck speed.