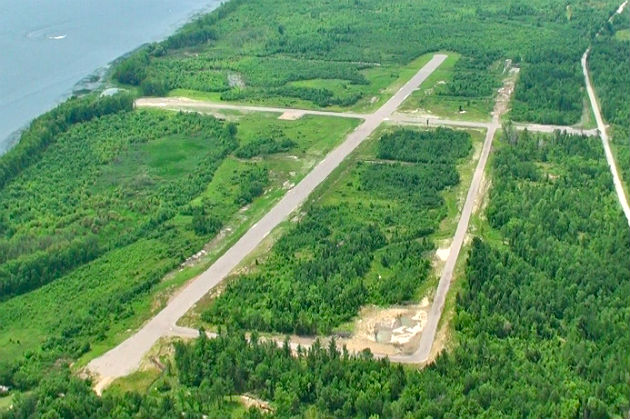 By the summer of 2011, the two perpendicular runways had been completed at Pontiac Airpark, but the project has now ended.

André Durocher, the driving force behind the Pontiac Airpark, recently announced that he has ended the project.

The 550-acre residential fly-in community was slated to have included not only a large number of home lots, but also a clubhouse, two runways and a seaplane base on the Ottawa River. There is also an existing equestrian facility next door.

"Unfortunately, after 12 years of great efforts, I only sold one lot, so I decided to close the project," Durocher said.

The project was conceived back about 2003 by Durocher, a land surveyor, as a place for people to build homes and park their aircraft in their own hangars, next to their houses. The airpark was to have been located west of Ottawa, on the north side of the Ottawa River in Quebec.

By the summer of 2011, the two perpendicular runways had been completed and graveled in, with a plan to pave them later. The water aerodrome facilities for floatplanes on the adjacent Ottawa River were commenced and registered with Transport Canada.

Construction on the first residential lots at the airpark project had started in December 2011, with the intention that home building would commence in the spring of 2012. In February 2012, an additional 85 acres of land located immediately north of the airpark project and north of the River Road was acquired. This parcel became the Elevage Fabie equestrian facility, which was opened in the fall of 2012.

By March 2012, a further 130 acres to the west of the airpark's location was added, with the intention of making it available for a golf course, hotel, restaurant and spa. Also that month, the mayor of the Municipality of Pontiac endorsed the project.

A year later, in February 2013, seven more parcels of land from the former Canadian Pacific Railway line property were added to the project. The intention was to construct trails for horseback riding, hiking, snowshoeing and cross-country skiing and allow greater access to the surrounding countryside.

Durocher stated that the land the residential airpark was to have occupied has been already been sold. Durocher indicates that he doesn't think the new owner will quickly develop the property, but will likely hold it as a long-term investment.