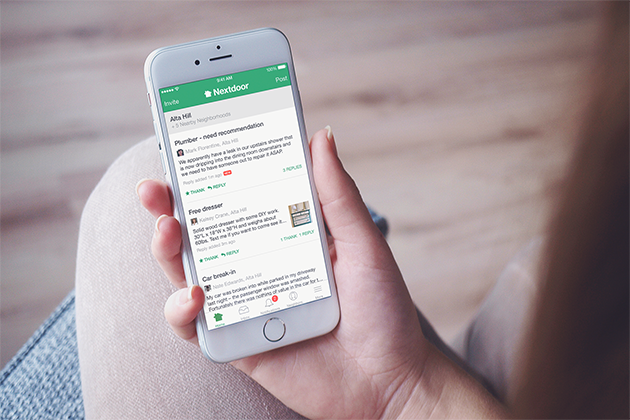 A 2016 Neilson report shows Americans spend more than 10 hours a day looking at screens, most of it on the Internet. So it makes sense that our police departments are taking note of the fact and trying to connect with their communities online.

One social platform that is helping them do that with success is Nextdoor.com. Operating as a private social network, Nextdoor connects neighbors. It helps them find a handyman or a babysitter, watch out for lost pets, sell old toys, books or bikes, organize a neighborhood watch group or quickly spread the word about a break-in or suspicious people in the area.

It is, however, interesting that the site has rapidly evolved to include the local law enforcement departments into their network.

The Grand Blanc Township Police Department in Michigan just became the 2,000th public agency to join Nextdoor. In an age of social networks, Nextdoor is doing more than connecting people. It is helping to create a strong social neighborhood where residents and law enforcement officers share the same interests and work hand-in-hand to combat crime.

In Grand Blanc Township, 70 percent of the neighborhoods are members, and with the police department now connected, it will help in easier and faster communications among all. Like others before them, the GBTPD also wishes to create a safer place for residents.

Officers around the country have found the platform a boon when it comes to communicating during disasters or finding volunteers, planning community events and to reducing crime. Nextdoor has proved to be immensely valuable when the officers want to post important safety updates or crime alerts.

More importantly, Nextdoor has quietly reconnected the police with the people. Each neighborhood has its webpage, matching them with their local police districts. This not only makes it easier to connect but keeps the communication relevant and quick. Whether it's a crime alert or an emergency notification, the news will reach the right people faster than before, for both officers and residents.

As the Nextdoor blog showcases, the platform takes considerable pride in connecting officers and neighbors in a time when community engagement is more critical than ever for police departments across the country. They have been under a harsh spotlight, leading to distrust and undermined relations with their communities.

But departments are using Nextdoor to organize events like Coffee with a Cop where police officers can relax and interact with community members over coffee. Residents can get to know officers better, ask questions and voice their concerns in a friendly environment. The concept has become so popular that Oct. 7 is now going to be the official National Coffee with a Cop Day.

As mentioned above, the platform has also been a boon when it comes to emergencies, and the recent California flooding proved that. As many counties were hit with heavy storms and flash floods, Nextdoor became the primary source of communication for all. Town administrations and residents kept each other updated about toppling power lines and trees, imminent flooding and road closures during the storm's duration.

Similarly, the Sacramento public agencies used the platform to find volunteers on short notice and request for donations for a warming center during the busy holiday season.

News may have become depressing, but stories like Nextdoor show the underlying strength of our communities.