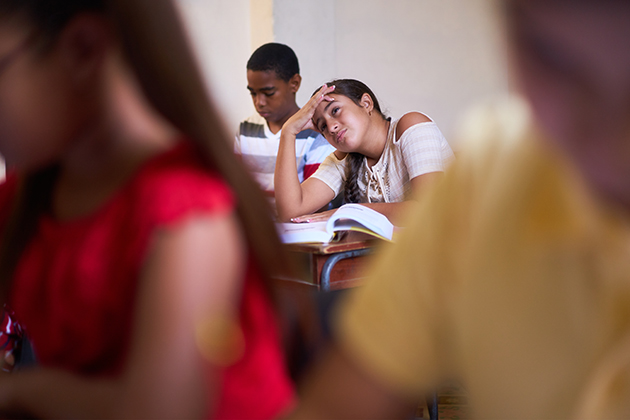 Part of the back-to-school preparation for many teenagers this fall was readjusting their sleep schedules to accommodate the early start times at many American middle and high schools.

My son Brady, for example, gets up each day at 5:30 a.m. to catch a 6:45 a.m. bus to take him 3.5 miles across town to his school, which starts at 7:30 a.m. Two weeks before school started, he began backing up his 7:30 a.m. summer wake-up time by a few minutes each day so that his sleep patterns would be adjusted.

Brady is not unlike many of his peers who work through the logistics of an early morning schedule in schools from coast to coast. A growing number of schools have responded to countless research that has concluded that later start times would benefit students.

The debate over later start times for schools is not new. In a MultiBriefs Exclusive article in 2014, I wrote about pros and cons of later start times for high schools. Then, I referenced a research report entitled "School Start Times For Adolescents," by the American Academy of Pediatrics that concluded that teens are not getting enough sleep, and it is impacting their ability to perform in school.

According to the report, teens need at least 8.5 hours of sleep each night. The report called upon schools to move their start time to a more reasonable 8:30 a.m. to accommodate this increased sleep need.

In a Washington Post article earlier this month, author Christopher Ingraham reported on some compelling evidence that suggests that, above and beyond the obvious health benefits to teenagers, later school start times could actually save the country big money — to the tune of $9 billion annually. Ingraham's article referenced this comprehensive study by the Rand Corporation that concluded that schools should start school no earlier than 8:30 a.m. for two reasons:

Ingraham quoted study co-author Wendy Troxel in a news release when she stated, "The significant economic benefits from simply delaying school start times to 8:30 a.m. would be felt in a matter of years, making this a win-win, both in terms of benefiting the public health of adolescents and doing so in a cost-effective manner." How significant are the economic benefits? According to their website, here is what the study concluded:

According to the National Sleep Foundation, the health impact of sleep deprivation among teens is staggering:

"Teens spend a great portion of each day in school; however, they are unable to maximize the learning opportunities afforded by the education system, since sleep deprivation impairs their ability to be alert, pay attention, solve problems, cope with stress and retain information. Young people who do not get enough sleep night after night carry a significant risk for drowsy driving; emotional and behavioral problems such as irritability, depression, poor impulse control and violence; health complaints; tobacco and alcohol use; impaired cognitive function and decision-making; and lower overall performance in everything from academics to athletics."

Later school start times has become such a national health issue that public health advocate organizations such as Start School Later have made it their mission to raise public awareness to the issue and ensure that school start time are compatible with health, safety, education and equity.

Many schools have already heeded the warnings and made adjustments to their start times. This fall, the Portsmouth, New Hampshire, schools were among that group. According to this NH Public Radio article, the switch from 7:20 a.m. to 8:20 a.m. for middle and high school students was met with a mixed response from the school community.

"I can honestly say it's been mixed," School Superintendent Steve Zadravec said. "We have a couple of days really to go on so far, and this has been a change for all of our middle and high school students, to start a bit later. I think we knew all along this would be an adjustment, so for some students, it's that adjustment. Some love it, have taken advantage of the extra start time in the morning."

One of the biggest complications of a later start time is the later end time. Zadravec commented on how that has impacted after-school programming in his schools.

"It's been working out pretty well," he said. "We knew going in that one of the things we wanted to address with the later end times as well because of after school activities, sports, etc. And everything has been scheduled to adapt to that later time. We've looked to some after-school programming at the middle school that's going to get off the ground."

As parents with four of five children now in the school, my wife Erica and I are torn over what is best. While we see the obvious benefits of starting school later, we also wonder how that would impact our children's busy afternoon and evening activity schedules. As it is, between band practices, cub scout meetings and baseball games, we are lucky if we can find time to even sit down and eat dinner as a family.

It will be interesting to see how this plays out, because over the next few years I anticipate a number of schools will make a shift to a later start time.