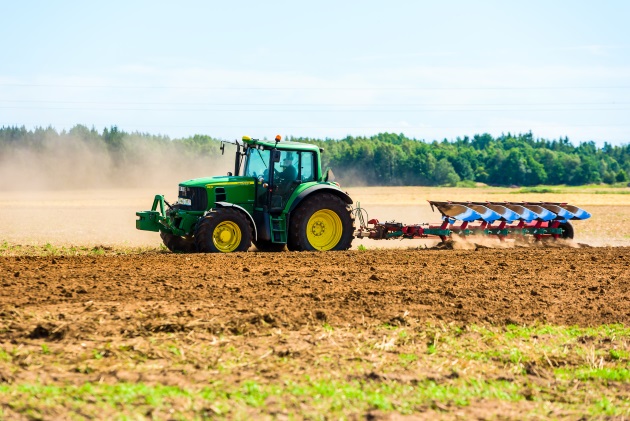 Quietly and without much fanfare, plastics and bioplastics are finding their way into the production of agricultural equipment, such as tractors, combines, plows and balers. Over the past decade, major manufacturers such as John Deere and International Harvester have transitioned both cosmetic and functional components from sheet metal to plastics and bioplastics, with very good results.

It is true that, in the production of such components, usually any number of known plastics and composites may be utilized, especially for harvesting equipment.

But these innovations are returning at least the material benefits of 1) reduced weight, cost and sheer complexity of the machines, and hence 2) reduced secondary farm operations — defined in the trade as all activities not directly related to crop production.

Manufacturers have discovered this nifty truth, especially regarding bioplastics: They more than cut the mustard. They meet or exceed the usual stipulated requirement for a nonmetallic stand-in — that is, that its mechanical and physical properties be virtually identical to the conventional materials it is replacing.

Put another way, bioplastics are turning out to be as versatile during production and performance as their metallic forebears — and, by the way, as handsome and dashing.

The impact of new, global requirements has been underlined recently by the new, twin-sheet thermoformed plastic folding grain tank covers some manufacturers have made for their combines.

Thermoforming had been well-utilized previously. But not the twin-sheet kind. The ostensible point of going double was to comply with certain European safety regulations, which bumped up strength and sturdiness levels.

But, of course, there have been manifold benefits achieved from working within those new, more challenging design tolerances. For example, there was simply no room in which to add structural bows to the tanks, as the designers would have preferred (since farmers must be able to walk on the tanktops).

The bows became outré since the regulations limit combines in their overall height, which sufficiently restricted the space for the cover as to preclude the use of bows.

Other examples of the transition have been produced by the supply management division at John Deere Harvester Works (JDHW) in East Moline, Illinois, for one. It has manufactured a plastic hood assembly for its 8000 Series Tractor with both outside, cosmetic surfaces and an underlying, structural frame made from engineered thermoplastics.

Quite a variety of items can be supplanted by plastics. Indeed, it seems clear, considering the replacements showcased at the industry’s recurring structural plastic parts competitions — according to a piece on "tofu tractors" in DesignNews. These run the gamut from styling and appearance parts, interior and exterior, to wear-resistant and functional parts, both light and heavy-duty.

In the case of the wear-resistant and functional parts, the new or newly developed processes have included ultrahigh-molecular weight polyethylene (UHMW-PE) extrusion; cold-forming; blow molding; overmolding; and casting in urethane.

The equipment manufacturers have not only started using plastics derived from sustainable feedstocks. They have adopted even further refined and improved twin-sheet thermoforming methods to cut down on stamped metal parts. They have innovated the RTM process, too, producing some rakish and popular rotomolded components.

These materials are 1) a polyurethane RIM system, the fruit of a collaboration with Bayer Corp. in Pittsburgh; and 2) an SMC developed with Ashland Specialty Chemicals in Columbus, Ohio. Deere initially had exclusive rights to the two new plastics. Lately, however, they became more fully available to other ag equipment producers.

All JDHW combines currently in production boast body panels composed of one of these soybean-derived materials. The RIM panels by themselves account for 225,000 pounds of soybean consumption annually. Such body panels include the harvester’s relatively heavy-duty rear wall and access door.

This may be most heartening to those who may be convinced that plastics are slowly destroying the world: Clearly the makers’ efforts evince a veritable push into raw materials based on renewable resources. There is quite the emphasis on starting from renewables and limiting environmental impacts and pollution in the selection of materials and processes used in producing the new components.

Just the renewed application of twin-sheet thermoforming has been a great strength-inducing advance that has at least kept costs down. This has also been the case with the renewed, refined application of rotational molding, a process that earlier enabled easily substituting plastic parts for metal ones.

Much the same can be said for a process Deere has also recently selected, known as virtually engineered composites (VEC). It was chosen primarily because it lowered tooling costs.

But its environmental advantages also came into play. Deere chose to apply it to limited production runs of a freshly configured rear wall and access door on Deere’s STS Combine’s low-volume model.

VEC uses tooling made from steel-infused polyester. But the process has more than counterbalancing environmental benefits.

It promotes lower styrene emissions and is inherently compatible with natural fiber reinforcements — in particular, natural fiber flax mat can be used instead of glass mat. That’s some indication that environmental considerations are indeed taken seriously in this sector of industry.