Pharmacists should give ‘Vials’ a chance 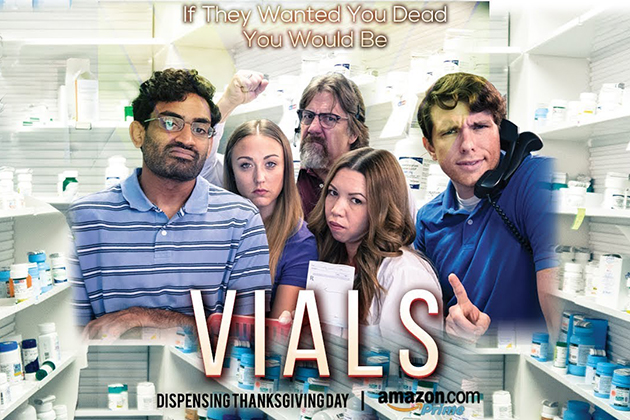 "Vials" — the much-anticipated (among some pharmacy folks) new TV series about pharmacists and retail pharmacy life — launched its first full episode Thanksgiving Day. The Amazon program promises to expose both the humorous and less humorous elements of retail pharmacy life, not to mention some of our more awkward and uncomfortable patient situations as well. You can watch it here.

Rich, played by David Lampe, is the stressed-out, Xanax-popping pharmacist and (I think) owner of Gateway Drug and Surgical Pharmacy. The pharmacy name seems to be a poke at the tendency of legitimately-prescribed controlled substances becoming the first step in the downward spiral of drug addiction. The fact that "Gateway Drug" is the pharmacy name gives us a clue for where this series is headed and what it will focus on.

Lisa, played by Alexandria Ayala, is Rich's daughter. She is a pharmacy school graduate who has yet to successfully pass her licensing exam and be fully registered as a pharmacist. The opening episode says she has been trying to pass this for three years. Maybe someone is taking a jab at the inadequate preparation that some students feel they are currently getting from their school of pharmacy.

Other cast members in the show include Joe, a technician who has been going to law school at night, passes his boards and lands his first job as a lawyer in the opening episode. He is also involved in a romantic relationship with Lisa, which Rich does not approve of. Doug (played by Sanjay Rao), a pharmacy intern, is there just learning the ropes of the profession and comes off as rather timid and inexperienced. Finally, Carmella (played by Elena Weinberg) is hired as a tech in this first episode after a long, and somewhat hilarious, interview process.

The opening full episode, entitled "Xanax," kicks off by introducing us to Rich, an alprazolam-addicted pharmacist explaining to his technician, Joe, why he won't be getting a bonus. Joe then surprises Rich with the news that he has graduated law school and intends to marry Lisa. Rich flips, and the narrator then provides a timely explanation (by use of a white board animation) of the mechanism of action of benzodiazepines along with the paradoxical rage sometimes associated with these drugs.

Following this, the episode then proceeds to showcase a number of pharmacy-patient encounters that expose a few crazy personality types we sometimes encounter at the pharmacy. Most pharmacy employees will recognize the irrational and disruptive behavior, albeit exaggerated, of the alprazolam-seeking patient who can't get her medication because it was actually sent to another pharmacy.

Next, we find Lisa having an extensive phone conversation with a man about his use of alprazolam in combination with alcohol, along with the potential sexual side effects that the patient insists on sharing with her.

The highlight of the opening episode is when Lisa and Doug interview three candidates for the technician position created by Doug's graduation from law school. The two male candidates are clearly losers and inappropriate for the role, but their answers to the interview questions are worth a laugh. Carmella, the third candidate, comes off looking like a genius compared to these other two, and she gets the job.

Peter Ustinov, the English filmmaker and humorist, once said that "comedy is simply a funny way of being serious." Episode 1 of "Vials" took a few of the serious issues facing retail pharmacy and exaggerated them for a laugh.

There are worse ways to deal with our professional problems. As Mark Twain once quipped, "Against the assault of laughter, nothing can stand."

But I'm not sure "Vials" is going to be a hit with the pharmacy-working crowd. The stereotypes might be offensive to some, and the foul-mouthed, teenage-level sex humor could be viewed as immature.

Pharmacists may not appreciate the less-than-flattering depiction of our profession. But I wouldn't dispense with "Vials" too quickly. Give them a chance to do some character development and explore some of the other absurd-but-real challenges we face, and maybe this series will catch on.