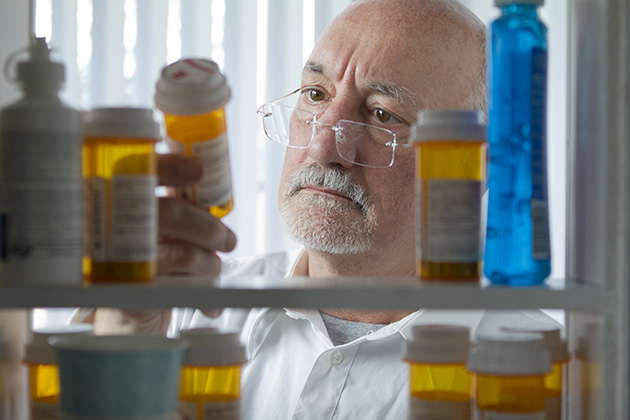 Pharmacists are obviously key players in prescribing medications. Now, as medication-related harm impacts aging populations, these same pharmacists are being called to take on an equally crucial role in the deprescribing process.

Deprescribing — the planned and supervised identification and reduction or discontinuation of unnecessary, inappropriate or ineffective medications — is a collaborative process that involves weighing the benefits and harms of medications in the context of a patient’s care goals, current level of functioning, life expectancy, values, and preferences, explains Stephanie Swanson, Pharm.D., in an article published by Pharmacy Press at the University of Minnesota College of Pharmacy.

Deprescribing is a viable route to consider for patients who are suffering from a number of maladies, including polypharmacy, adverse drug reactions, ineffective treatment, falls, or when the goals of treatment have changed, note medical researchers from the Centre for Education and Research on Ageing at the University of Sydney.

"If patients are slowly weaned off their medicines, withdrawal and rebound syndromes are usually not serious. A cautious approach to deprescribing includes two principles — stop one drug at a time and wean doses slowly over weeks and months," they emphasize.

Polypharmacy was named one of three key action areas in the World Health Organization’s third Global Patient Safety Challenge: Medication Without Harm, set up to tackle avoidable medication errors — a leading cause of avoidable harm and injury in healthcare systems around the world, estimated to cost $42 billion annually.

"Polypharmacy is common among older adults due to a high prevalence of chronic conditions that often require multiple medications for optimal management," explain authors of an article in Physician Review. "It often results from prescribing cascades, which occur when an adverse drug effect is misinterpreted as a new medical problem, leading to the prescribing of more medication to treat the initial drug-induced symptom."

Carefully evaluating every medication when caring for older adults is critical in avoiding patient harm and reducing polypharmacy, advises Michelle Tran, Pharm.D., in another article published by Pharmacy Press at the University of Minnesota College of Pharmacy.

Extreme caution needs to be exercised when using American Geriatrics Society Beers criteria and the STOPP/START criteria medications in the older population.

As Tran emphasizes, "In these instances, the risks need to be heavily weighed against the benefits of starting these medications."

When deprescribing can improve health outcomes

In addition to polypharmacy and inappropriate medications, the elderly population is susceptible to medicine-related harm due to physiological changes related to aging that affect metabolism, elimination and drug distribution, according to Tran.

Falls, another serious public health concern for older people, can be reduced through deprescribing. According to a 2010 Clinical Geriatric Medicine review, polypharmacy and drugs acting on the central nervous system are important risk factors for falls, increasing the risk by around 50%. A randomized, controlled clinical trial showed that falls were reduced by 66% following the gradual withdrawal of psychotropic drugs coupled with a home-based exercise program.

"A feasibility study to reduce polypharmacy in people over 70 years of age suggested that over half of their medicines could be discontinued. Overall there was improvement in cognition and the patients' global health and only 2% of the drugs needed to be restarted because the original indication re-emerged," share the University of Sydney authors.

Simplification of drug regimens has the added benefit for individuals trying to keep track of several different medications, making adherence easier while reducing dosage and related errors on the part of the patient.

"Pharmacists can be key players on the healthcare team to aid in effectively deprescribing unnecessary and unsafe medications in the older adult population," writes Michelle Tran, Pharm.D.

In a 2018 randomized trial of patients over 65 years who were prescribed 1 of 4 Beers criteria medications and recruited from 69 community pharmacies in Quebec, pharmacists provided educational deprescribing brochures to an intervention group of 241 patients and sent evidence-based pharmaceutical recommendations on deprescribing to their corresponding physicians.

After six months, 43% of these patients no longer filled prescriptions for inappropriate medication as compared to 12% in the control group, which was provided usual care.

These results demonstrate the potential for community pharmacists to successfully intervene and advocate for the discontinuation of potentially harmful medications — positively impacting patient safety.

"Transitions of care programs may be more effective if they utilize pharmacists to help deprescribe potentially harmful drugs from hospital admission and improve patients’ understanding of medications," concludes Tran. "Along with pharmacist-led interventions and pharmacist-to-physician communication, directly involving patients in decision-making processes to deprescribe further empowers the patients to be able to make these changes with their healthcare team."

Advocates for appropriate medicine use set trend in Canada

In Canada, hospitalization of people over 65 years of age due to medicine-related harm is five times greater that of younger people. To address this pressing issue, a concerned group of healthcare professionals, patient advocates, policymakers and researchers formed the Canadian Deprescribing Network (CaDeN) in 2015.

In only four years, significant progress has been made in empowering patients and raising awareness among policymakers, shares Director Cara Tannenbaum, geriatrician and researcher in the above-mentioned study out of Quebec.

"Medicines safety and deprescribing are now on the radar of Canadian community organizations, the government, patients and healthcare providers," notes Tannenbaum in a recent Pharmaceutical Journal blog. "There has also been increased interest in traditional and social media, with appropriate medicine use now at the forefront of public health concerns. Older people are having meaningful conversations with their health providers."

At the crux of their campaign is empowering patients with accurate, credible information largely through webinars, online quizzes and brochures about specific inappropriate prescriptions. All these materials are provided for free and many are available in different languages. Extensive resources for pharmacists and other healthcare providers as well as patients are available at deprescribing.org.