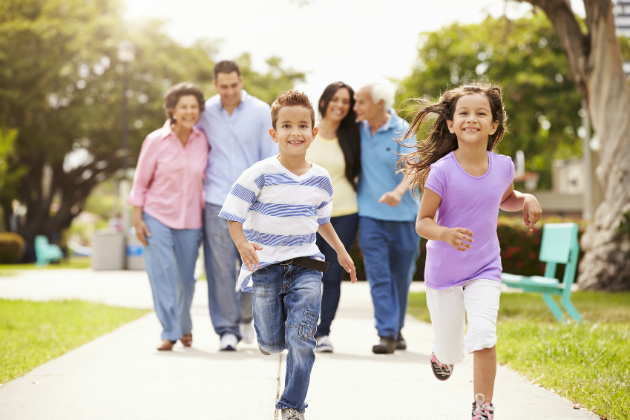 Childhood obesity is a cause that has attracted concern all the way to the White House. Senior mobility has been proven to improve overall health, especially mental health. And studies have shown that being active in middle age pays health dividends later in life.

If only there were a way to provide health benefits to all three age groups at the same time.

Multigenerational parks might be the solution to that quandary. While youngsters still gravitate to swing sets and slides, others are seeking the use of public parks, spurring a drive to create more diverse facilities across the country.

We're not talking simple walking trails, either. Older children can take on climbing walls and skate ramps, and sand volleyball can be played by a wide range of ages. Some solutions are as simple as swings that can seat adults on one side, facing children on the other.

Those senior walkers? They can have access to fitness stations along the way. Parks in Spain feature playgrounds for seniors, filled with balance beams, game stops and activity stations.

Accommodations such as safety and ease of access are concerns for seniors — like easily readable signs — according to Jill Beam, the Chair of Leisure and Aging Director for the Texas Recreation and Park Society.

"The elderly are often fearful of falling and breaking a hip and are afraid of uneven surfaces, trash caused by the homeless, a lack of visibility while walking paths, a lack of shade and excess heat and cold," she said. "There needs to be improved control of park layouts for seniors."

Bringing different generations to parks is important in the long run.

When parents are physically active, their children are nearly six times more likely to be active as well, according to a study in The Journal of Pediatrics. Those on their way to becoming seniors need sites for physical recreation also. A Finnish study determined that "midlife, moderately vigorous physical activity was associated with less cognitive impairment" as the subjects aged.

And creating parks that are accessible to seniors is important, as a U.S. census report shows that the population age 65 and older is expected to double by 2050.

Beam points to activities that can cross generations as a boost to facilities.

"I feel that some outdoor games that are fitting for both seniors and children would be appealing in parks (i.e., bocce ball, horseshoe pits, washer pits, exercise stations, etc.)," she said.

Community gardens are another options as they not only provide physical activity and socialization for adults, they provide an educational component for children and a path to healthy eating habits.

A diverse approach is visible at Pennsylvania's Lewisburg Area Recreational Area, which has been known to draw more than 1,000 visitors in a day. Besides a swimming pool and tennis courts, the facility boasts unique features such as climbing boulders, skate parks and wellness stations.

Increased activity pays off for municipalities, too. They're paying for and building parks for use by the community. The return on investment is the benefit to citizens' health. And unique park facilities are more likely to attract families to communities.