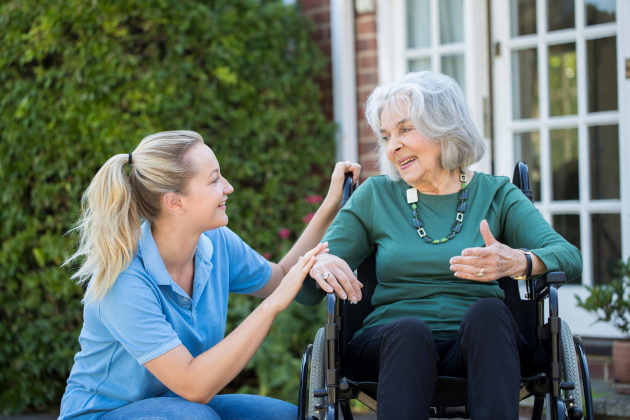 Miriam is sitting up in bed when I enter her hospital room. She is neatly groomed with a lovely short gray bob and large eyes that greet me warmly. Before her lie several untouched containers of vanilla pudding. The television is tuned to CNN and she tells me that she watches the business show religiously every day.

As an oncology social worker, I have the privilege of working with adults undergoing treatment for cancer, primarily gynecologic and hepatobiliary cancer.

Miriam is a survivor of ovarian cancer and has been readmitted for the treatment of intractable pain, nausea/vomiting and what looks like a small bowel obstruction. A full work up revealed recurrence and she is now at the point of considering which line of treatment to pursue, if any.

“Before the pain got bad, what was a typical day like at home?” I ask Miriam gently. She speaks of tending to her garden, having her young grandchildren over to bake, walking the grounds of her gated retirement community and playing Mahjong weekly with a set of dear friends. She tells me how much she loves her neighborhood and its proximity to the beach, which always brings her peace.

That simple question — “What is a typical day like at home?” often elicits a host of information that is critical to understanding and supporting older adults living with cancer. The nuances, complexity and challenges of geriatric oncology call for skill, compassion and a willingness to really sit and listen, understand and appreciate the preferences and values of older adult patients and their family members/caregivers.

When comorbidities or caregiver issues influence the clinical picture, it is vital to ask what matters and explore how oncologic lines of treatment may affect daily routines, engagement in activities and, ultimately, quality of life.

Miriam struggles a lot with her fatigue and nausea. She talks at length about not being able to go out for lunch with her friends or go for regular walks around her neighborhood. She laments her inability to be fully present with her grandchildren during their visits, “I am so nauseous and worn out that I stay on the couch the whole time. It’s miserable.”

Her clinical picture is complicated by the presence of early stage dementia. Miriam tells me that she has grown more and more forgetful in the past couple of years to the point that her son now manages her finances.

She recently gave up driving after a scare in which she found herself lost for over an hour until she called her son and he guided her home. In the privacy of the hospital room, Miriam confides that she is really worried about becoming even more forgetful and debilitated by another round of chemotherapy. “I know this may sound bad, but I don’t know if I’m up for going through that again.”

Social workers are advocates. We are integral parts of the interdisciplinary team and we practice one of the basic tenets of our field: Recognizing the strengths of the individual and mobilizing them to support well-being and quality of life.

Miriam has a lot of factors at play in deciding her next steps. As is true with so many older adults living with cancer, she has significant comorbidities that need to be considered. Fortunately, she also has a number of strengths to draw upon, including a very supportive family, adequate financial resources, access to primary and secondary insurances, optimism and a strong spiritual faith that guide her.

Ultimately, I coordinated a family meeting with Miriam and her children. We met with members of the interdisciplinary treatment team, including oncology and palliative. In a supportive setting, we explored the benefits and risks of various treatment approaches, incorporating decision aids and promoting shared decision making.

Miriam and her children felt informed and empowered in deciding to forgo further curative treatment. Extensive education regarding hospice and its philosophy were provided, helping to assuage fears around burdensome symptoms and suffering. Miriam ended up going home to her comforts, her family and friends and the nearby beach, where her son often brought her in her final weeks.

There are a multitude of gifts in working with older adults. As social workers, we can take part in emphasizing the strengths that they have, fighting ageist perspectives, advocating for the completion of advance directives, recognizing the impact of comorbidities and caregiver issues and promoting shared decision-making.

The greatest gift for me is listening to my patients’ narratives, inviting them to integrate their illness experience into that narrative and supporting decisions that will reflect their values and preferences.

Carina Oltmann, LCSW is an oncologic social worker with close to 20 years of experience working in the fields of oncology, geriatrics and palliative care. Carina currently works at University of Miami Sylvester Comprehensive Cancer Center and also runs the Miami Center for Wellness and Aging, a private practice in Coral Gables, Florida. She has been a proud member of SWHPN since 2014.