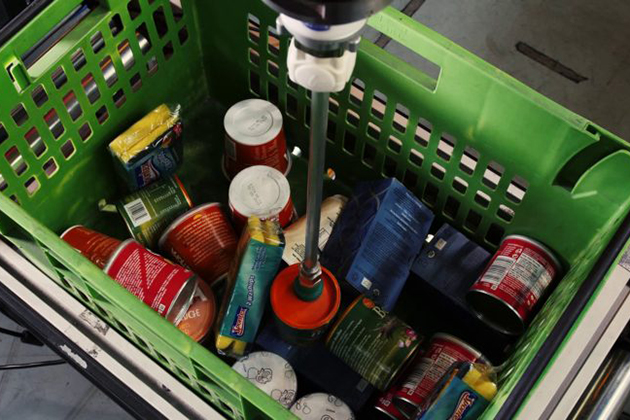 Ocado's robotic lab has generated a lot of interest in the retail and distribution industries. The UK-based online grocer has set the stage for the future of grocery shopping with the robotic innovations in its automated fulfillment center.

Ocado was founded 17 years ago, and the e-commerce grocer compares with Trader Joe's for the quality of its goods. But, unlike its American counterpart, it is entirely online and boasts a robot army.

Its grocery delivery system has paved the path for others in the industry as a forerunner in the concept of an automated warehouse that is primarily run by robots.

Global competitors like Instacart hire humans to collect and deliver products, but Ocado uses an innovative mix of humans and robots. The bots deliver boxes filled with products from a central hive in the warehouse to the human workforce. The humans then sift through the goods, bag them and load them onto trucks.

This method allows Ocado to process 160 products per hour, per person across its four warehouses in Britain. Constant development of the technology promises a 3 percent efficiency improvement each year.

The use of bots helps them bring down prices and speed up delivery. Ocado has made immense profits in recent years and recorded sales of $1.4 billion in 2016.

But its real potential lies in licensing its hive technology to others. Now, they are replicating this automated warehouse technology for other grocery firms like Britain's Morrisons and France's Casino.

At the same time, Ocado's robotics team is continuing to work to deliver better and improved performance. The team has recently developed a unique 3-D vision system, which will help a large robotic arm recognize products and grab them faster.


This robotic arm is made of aluminum and features a simple suction nozzle. The nozzle makes it easy to pick up goods and transfer them to a bag until it is full. It can identify objects with the help of the Microsoft Kinect cameras attached to it. According to an Ocada spokesperson, their eventual goal is to have one robot grasp 50,000 grocery products and move them through the facilities.

Amazon warehouses are teeming with robots, but they do rely on humans for more intricate tasks like identifying individual objects and moving them around. Ocado wants to overcome this hurdle and increase efficiency by introducing variability in the process.

Ocado's algorithms are not just about handling, processing and delivery, but also about minimizing damage and loss. The 3-D vision system and built-in sensors will allow careful handling. Ocado's human staff will soon wear electronic gloves to train the object-agnostic picking and placing robots to grasp better.

Less damage means engineers won't have to program in new SKUs for catalog additions. It also means a greater range of items can be picked up and faster. The futuristic system is streamlined and flexible, better suited for the post-Amazon grocery and retail world. Right now, Ocada holds the key to that kind of efficiency.

Ocado's other robotics projects include a life-size humanoid robot with cameras for eyes. It has a telescopic torso and that runs around on wheels to reach high places and help its human counterparts. There is also a human-shaped bot made of translucent plastic tubes and controlled with compressed air.

Bots for futuristic driver-less delivery trucks and use of artificial intelligence are also in the pipeline. Full-fledged application of these emerging technologies will change the way we shop for groceries in the future.