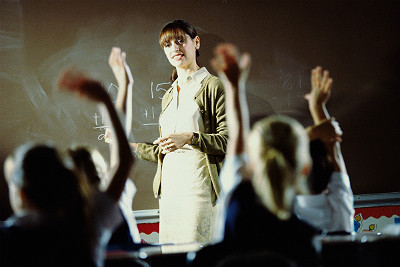 As our nation continues to look for ways to hold our schools accountable for student learning through student tests such as PARCC and SBAC, we have also turned to raising the bar for teacher tests. Elizabeth Harris, a writer for The New York Times, examined the issue in a story last month entitled, "Tough Tests for Teachers, With Question of Bias."

In 2013, ETS, the testing company that owns the most widely-used teacher test Praxis released an updated version called Praxis Core. ETS marketed the new test as one that was aligned to the Common Core and "designed to be a more rigorous and comprehensive series of assessments in the areas of reading, writing and mathematics."

Harris reports that after a couple years with the new tests, minority teaching candidates have struggled, creating a question of bias with these new exams. David M. Steiner, dean of the School of Education at Hunter College and a former New York State education commissioner was quoted as stating, "This is very serious. It reflects, of course, the tragic performance gap we see in just about every academic or aptitude test."

Praxis Core is currently used in 31 U.S. states or jurisdictions. Since 2013, Harris reported that ETS released data indicating 55 percent of white test-takers passed the math portion on their first attempt, compared to 21.5 percent and 35 percent for African-American and Hispanic test-takers, respectively. The State of New York has seen similar disparities between racial and ethnic groups with its New York State Teacher Certification Examinations.

Bias in teacher tests is nothing new. According to an analysis of federal data by Richard M. Ingersoll, a professor of education and sociology at the University of Pennsylvania, the number of minority teachers has doubled in the last 30 years. But according to the U.S. Department of Education, in the 2011-2012 school year, more than 80 percent of public school teachers were white.

The question of bias in teacher tests has now started to play out in the courts. Earlier last month, The New York Times reported that federal courts recently found that an exam for New York teaching candidates was racially discriminatory because it did not measure skills necessary to do the job. The decision now pushes the issue back to education officials to figure out what to do next.

One promising new alternative to a standalone teacher test is edTPA. According to its website, edTPA "is a performance-based, subject-specific assessment and support system used by more than 600 teacher preparation programs in some 40 states to emphasize, measure and support the skills and knowledge that all teachers need from Day 1 in the classroom."

With edTPA, aspiring teachers must prepare a portfolio of materials during their student teaching experience. According to the edTPA website, the materials "demonstrate readiness to teach through lesson plans designed to support their students' strengths and needs; engage real students in ambitious learning; analyze whether their students are learning, and adjust their instruction to become more effective."

Part of the portfolio review includes unedited video recordings that aspiring teachers must submit of their work in real classroom settings that are scored by highly trained educators.

What could set models like edTPA apart from more traditional teacher tests is their ability to use multiple data points to determine whether an aspiring teacher will be successful in the classroom. Will these new models have bias in them as well? Only time will tell.