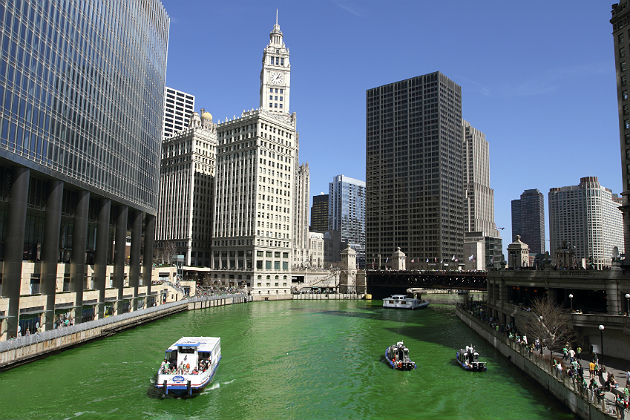 Leprechauns, parades, wearing green, Irish boiled dinners and beer are part of the traditions associated with St. Patrick's Day. And with planning, the holiday can be joyous, boisterous and safe.

Those seeking to celebrate can find parades in most major cities. The first recorded parade in celebration of St. Patrick's Day took place in New York City where Irish soldiers serving in the British army marched in 1762 to celebrate the traditional feast day.

Since then, the holiday has gained international recognition with a wide variety of ways to celebrate. Chicago always holds a large parade on a Saturday and dyes the river green. In Rio de Janeiro, Brazil, the 125-foot Christ the Redeemer statue is bathed in emerald-colored lights, and Australia uses similar lights on the Sydney Opera House in celebration.

A major part of the holiday celebration is the consumption of beer. It has been reported that 1 percent of the world's annual consumption of beer occurs on St. Patrick's Day. Americans spend a quarter-billion dollars on beer for the holiday, and Irish beer (in particular Guinness) is a popular choice all over the world. Close to 5.5 million pints of Guinness are consumed daily, but this goes up to 13 million pints on St. Patrick's Day.

With all the celebration and consumption of alcohol, there have been some unusual behaviors during the holiday. Officers can be preoccupied with all the drunken celebrants, leaving their other law enforcement duties behind.

In 2010, a Tennessee bank filmed a robbery with the suspect dressed as a leprechaun. One of the most noted art heists, the theft of 13 artwork pieces from Boston's Isabella Stewart Gardner Museum took place on St Patrick's Day in 1990, and the thieves were reported to be dressed as officers.

The celebrations themselves can have serious consequences. The holiday is considered to be one of the deadliest when it comes to alcohol-related fatalities and driving. The period beginning the evening of March 16 through the early morning of March 18 had 266 deaths due to drunk-driving crashes over a period of five years.

The National Highway Traffic Safety Administration (NHTSA) is undertaking an awareness campaign and providing information to communities in an effort to prevent future fatalities and offer this simple reason: "For too many in the United States, St. Patrick's Day has ended in tragedy due to drunk drivers getting behind the wheel."

Their website offers materials including banner ads, tip sheets and news releases that can be customized for civic groups, law enforcement and community agencies. NHTSA comments on the materials, "These marketing tools can be used to fit your needs and objectives while, at the same time, partnering with other states, communities and organizations on this drunk-driving prevention initiative."

Plan ahead in order to enjoy the green rivers, emerald lights, parades and beer. NHTSA suggest arranging transportation ahead of time. One means to do so is NHTSA's SaferRide application to find a cab.

This can be done by downloading the NHTSA SaferRide application which has several forms: for Android and Apple. The app can identify your location and call a taxi or a friend for a ride home or to pick you up.

On St. Patrick's Day, drink responsibly and keep an eye out for unruly leprechauns.