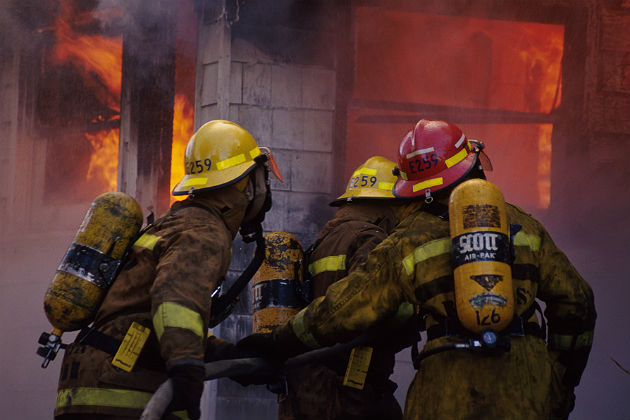 Firefighting is one of the most dangerous jobs in the world — but why?

We know sudden cardiac death is the most common cause of a fire fighter fatality, according to the Centers for Disease Control and Prevention (CDC). In fact, coronary heart disease is responsible for about 45 percent of on-duty deaths among firefighters in the United States.

A new study in the journal Circulation finally provides pathogenic mechanisms behind firefighting activities and acute myocardial infarction (MI) in those fighting fires. The physical exertion of firefighting combined with exposure to extreme heat may trigger thrombus formation and impair blood vessel function — changes that can injure the heart muscle and increase the risk for acute myocardial infarction.

The researchers monitored the participants' heart rate and blood pressure for 30 minutes before the exercise and for 24 hours afterward. Following each simulation exercise, researchers measured platelet activation, ex vivo thrombus formation, fibrinolysis and forearm blood flow in response to both endothelial-dependent and -independent vasodilators.

After the simulation, participants' core temperature increased by 1.0±0.1 degree C and their weight decreased 0.46±0.14 kg. Exposure to fire simulation increased the formation of blood clots under low-shear (73±14 percent) and high-shear (66±14 percent) conditions, as compared with the control group, and it increased platelet-monocyte binding (7±10 percent).

The researchers noted a dose-dependent increase in forearm blood flow with all vasodilators, attenuated by fire simulation in response to sodium nitroprusside and acetylcholine. These signs were associated with asymptomatic myocardial ischemia, increased fibrinolytic capacity and a rise in plasma cardiac troponin I (cTnI) concentrations.

"We assessed blood clotting in response to both extreme heat and physical exertion. In this setting, an increase in blood clotting is likely an exaggerated normal physiological reaction to both these stressors," said Nicholas Mills, M.D., Ph.D., lead researcher and chair of cardiology and consultant cardiologist at the University of Edinburgh in Scotland.

"Lower blood pressure immediately following fire suppression is likely due to dehydration and an increase in blood being diverted to the skin to help the body cool down. We discovered the core body temperature increased, on average, nearly 2 degrees Fahrenheit over 20 minutes. And increases in hemoglobin occur as the body loses water and the blood gets more concentrated."

The study underscores the unique cardiovascular stresses experienced by firefighters.

The researchers concluded their study by noting that limiting exposure to heat, cooling and rehydration can relieve the risks posed by firefighting simply and inexpensively.